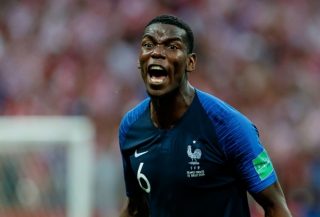 Listen up, Stan Collymore, Garth Crooks and Graeme Souness. Your strange obsession with Paul Pogba’s hair colouring should really be a thing of the past.

For his heroics in the France World Cup-winning side, Pogba deserves more respect and those who battered him in the press over the past 12-months ought to treat their obsession with caution next season.

Pogba often togged out for games with colourful hairdos and some felt it was getting in the way of his performances, therefore, acting as a distraction.

Pogba’s maturity has been questioned a number of times, but not at the World Cup where he became a leader of men.

The French star didn’t bother with much colouring throughout the summer and says he didn’t want to give critics more excuses to slate him.

He responded to the question on social media:

France manager Dider Deschamps has been talking to kicker about Pogba’s influence at the World Cup, after critics suggested he should be dropped before the tournament began.