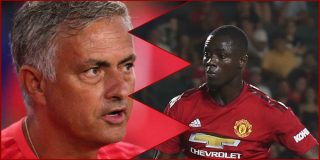 Jose Mourinho praised Eric Bailly after he played against Liverpool despite having an injury.

The boss insists that teams need players of Bailly’s calibre.

United are struggling on tour with a limited number of players due to a combination of injury and post-World Cup absences. In our last outing, we were drubbed 4-1 by Liverpool in their International Champions Cup encounter at Michigan Stadium.

Bailly, who was the first player signed by Mourinho following his arrival at Old Trafford in 2016, had not even been included in the squad to face Jurgen Klopp’s side following a suspected ankle knock against AC Milan.

Then Chris Smalling sustained an injury in the warm-up, so Bailly put his hand up to play and drafted himself into the starting line-up. A clear sign he is fighting his way back into Mourinho’s good books.

“When he saw that Smalling in the warm-up was leaving, he decided by himself he did not want another kid on the pitch,” Mourinho said.

“That is why we have him, why we still have him and why he is going to stay with us because football teams need people like him; the kind of people where the club is more important than anything else.”

This all comes after rumours of discontent between Bailly and Mourinho after being troubled by fitness issues last season. He obviously takes note of what the coach says and is looking to further his United career, which is a positive sign for us fans.

If Bailly can stay fit, I have no doubt he will be regarded as one of the best defenders in the Premier League.

It’s a shame that, at times, he could be labelled the Ivorian Phil Jones. Both appear to be made of glass.

Mourinho went on to confirm that the former Villarreal defender will feature in his plans for the coming season.

“He is a team boy, he is a great boy,” Mourinho added. “He is an honest man, always ready to give everything for the team.”