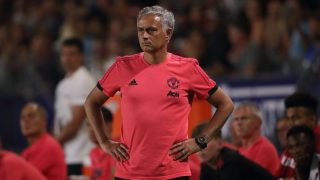 The boss is clearly unhappy with the way that United’s pre-season preparations are going, and he wants some of his first-team regulars to return to training ahead of schedule.

According to The Times, Mourinho expects Paul Pogba, Romelu Lukaku and Marouane Fellaini to end their breaks early in order to give their team-mates a much-needed boost.

The England internationals within the squad who were involved in the World Cup have also been called upon by Mourinho, as he feels his team is nowhere near ready for the upcoming Premier League campaign.

There are currently nine players injured and Mourinho plans to have his World Cup stars back in training a week early.

Marcus Rashford and Phil Jones took it upon themselves to report for training early and Mourinho understandably wants to see similar eagerness from the rest.

“I hope somebody wants to do what Rashford and Jones decided to do,” Mourinho said.

“Which is to be back a little bit earlier to try to help the team because, for the beginning of the season, we are going to be in trouble.”

The transfers haven’t gone to plan either, so Mourinho’s frustration is more than justified. There is lots of work to do with such little time.

Credit to Rashford and Jonsey for returning early.