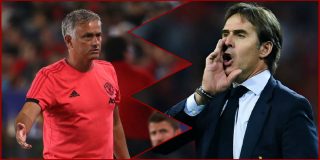 Real Madrid will get their pre-season preparations underway on Tuesday, when they face Manchester United in the International Champions Cup.

The match takes place at the Hard Rock Stadium in Miami Gardens, Florida.

MUTV subscribes will be able to watch the game live. It will kick-off at 1:05am UK time.

Some fans made a big deal out of the result and Mourinho lambasted his players.

As a result, preparations for the upcoming season haven’t gone to plan for United. Mourinho continues to take criticism for his playing style, Ed Woodward has failed to deliver transfer targets and the manager has even become favourite to be the first Premier League manager axed next season.

And while Andreas Pereira has been a stand-out player throughout the tour, he is not expected to play a major role once everyone returns from their holidays and the season get properly underway.

Alexis Sanchez has been in flying form too, as he prepares to silence critics once the new season begins. The Chile international was slated following his January arrival from Arsenal because he didn’t hit the ground running. Mourinho and Alexis will hope that is about to change – starting against Leicester on August 10.

Moreover, a win over Real Madrid could bring a major boost to the side. Friendly or not, we won’t face a bigger opponent this season.

The European champions shouldn’t be as fit as United, so there should be a chance of winning this game.

New manager Julen Lopetegui will be without Cristiano Ronaldo after his switch to Juventus. For that reason, Madrid should have a new look about them.

Toni Kroos and Gareth Bale have travelled to Florida, along with a host of talented youngsters, which will tease United supporters, who were hopeful of landing one of those in the transfer market this summer.

They will remain in Madrid unless something drastic happens.

It will be intriguing to see which youngsters Mourinho trusts to put in a performance against his former club, who are also preparing to unleash young players for the next era.