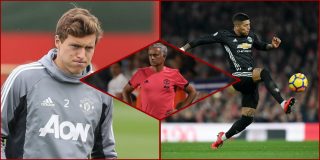 Lyon wish to bolster their defence and have placed Mamadou Sakho and Victor Lindelof on their shortlist.

Les Gones finished third in Ligue 1 last season and, having so far kept hold of Nabil Fekir, do not believe they need major adjustments in the transfer market.

However, they do want to bring in a centre-back before it’s too late.

French sports daily L’Equipe, as per Inside Futbol, claims both Sakho and Lindelof are on Lyon’s shortlist of options, along with Benfica star Ruben Diaz and Barcelona defender Yerry Mina.

It would come as a surprise to us if Mourinho let Lindelof leave after just one season at United. He has struggled to settle but after a promising World Cup at the heart of Sweden’s defence, there is every chance he will turn things around this season.

The report carefully suggests that neither Sahko or Lindelof are set to join Lyon just yet, but the French club are expected to soon step up their efforts.

Man United have five centre-backs (Smalling, Jones, Bailly, Rojo, Lindelof) who all need to play alongside a senior centre-back who knows what he’s doing. If they buy Harry Maguire, they’ll have six.

With links to Harry Maguire and Toby Alderweireld, manager Jose Mourinho may decide to cash in on one of his many defenders. The Independent claim that will be Marcos Rojo following interest from Wolves.