Manchester United have had a slow start in the United States. Even against poor opposition such as San Jose Earthquakes, Jose Mourinho’s men were far from convincing and the Premier League is just around the corner.

The match against AC Milan threw up another turgid display. Whether or not you want to put that down to the manager is up to you, but we still have a number of key players to return from their holidays and the prospect of making more signings before the transfer window shuts has kept me from ultimate pessimism.

Surely, it’s only a matter of time before everything starts to take shape. Mourinho isn’t the complete dinosaur like some members of the press try to make him out to be, though he needs to start proving himself again rather than point the finger of blame at anyone but himself.

With that in mind, let’s take a look at our predicted Manchester United line-up to face Liverpool: 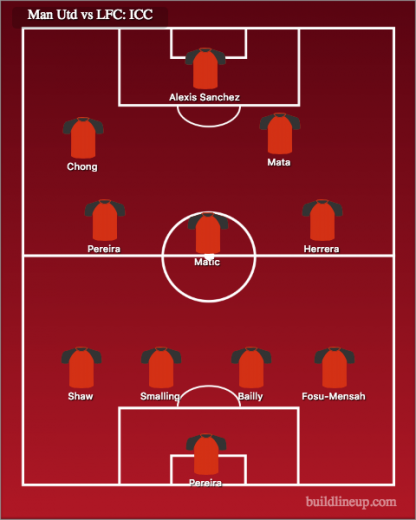 Jose Mourinho has chopped and changed between Joel Pereira and Lee Grant until this point. Whoever starts is likely to be replaced after the interval.

The boss has limited options at full-back. On the left, Shaw will start, as he prepares to prove himself once the competitive season begins. Antonio Valencia’s calf injury could see either Timothy Fosu-Mensah or Matteo Darmian at right-back but, with the Italy international looking to force a move, I’d go with the younger option. At centre-back, Chris Smalling and Eric Bailly need to show they can be trusted when put to a test. That wasn’t the case against AC Milan and neither led Axel Tuanzebe despite their experience.

Nemanja Matic should make his first start on tour and take up the deep-lying role previously carried out by Andreas Pereira, who has been one of our stand-out players this summer, following his loan spell at La Liga outfit Valencia. Hopefully, Fred makes his first appearance for the club, although I fancy Ander Herrera to start the game.

Up front, Alexis Sanchez has been my player of the tour so far. He looks hungry and determined to put last season behind him. Juan Mata and Tahith Chong can provide technical brilliance from wide positions and interchange if necessary.