Manchester United have had an underwhelming summer so far with just three additions, but arguably only one that really strengthens the starting line-up.

With signings like Diogo Dalot and Lee Grant, the squad should benefit rather than the starting team.

It seems as though Jose Mourinho has been let down during his most important transfer window yet, as United manager. There’s even a chance it could be his last if a second consecutive season ends in failure.

Despite having a strong start last year, we tailed off towards the back end of the season and even lost the FA Cup final to rivals Chelsea.

Fans were critical of Mourinho’s style of play – a conservative approach that served him well down the years but appears to have aged – and there will be a demand to see more attacking flair from his players this season, especially if we’re to see an improvement from Alexis Sanchez and Marcus Rashford.

Without further ado, I have decided to see just how United could line-up next season as we look to win our 21st league title…

David de Gea is here to stay! After a poor World Cup, which probably put him off joining Real Madrid for life, the Spaniard is expected to link up with his Manchester United team-mates next week in the United States. He will then be introduced to Lee Grant, United’s new back-up goalkeeper, who joined from Stoke City for approximately £1.5 million, as per the Daily Mail.

Grant has been very impressive on tour and it is expected that the highly thought of Joel Pereira will spend the season out on loan to gain first team experience. In May, ESPN suggested that the 21-year-old is wanted by La Liga sides Real Betis, Sevilla and Real Sociedad as well as Torino, Atalanta and Fiorentina in Serie A.

United were expected to sign Alex Sandro to improve the left-back department, though like other deals it never quite materialised. That means we’re likely to see Ashley Young retain the role with Luke Shaw as back-up.

As things stand at centre-back, we’ll probably start the season with Eric Bailly and Chris Smalling at the heart of defence. Marcos Rojo and Phil Jones are forever injured, while Victor Lindelof has struggled to adapt to the English top-flight. The Swede had a rather impressive World Cup and his form in a United shirt could be down to the pressure of playing for the world’s biggest football club. Whatever it is, I expect Mourinho to help him battle through it this year.

Of course, there’s another new addition as Diogo Dalot joined from FC Porto after making just eight appearances for Mourinho’s former club. The 19-year-old cost United £19.3 million and is likely to spend his first year at the club as an understudy to Antonio Valencia.

With Valencia being club captain, one would presume that he’s going to start every possible game for the Reds across all major competions.

Hopefully, by the time I’m sat here previewing our Premier League opener against Leicester City, Mourinho will have signed Toby Alderweireld from Tottenham Hotspur to partner Bailly. Not Smalling.

With the defence hardly strengthened and just one addition made to our midfield, it’s fair to say we’re relying on individuals to up their game from last season.

Paul Pogba in particular needs to bring his World Cup form into the new season. After winning football’s biggest prize, he is now expected to lead this group of players and show more consistency throughout the season.

Alongside Pogba next season should be Nemanja Matic and new signing Fred, who joined from Shakhtar Donetsk for a fee believed to be worth £52 million.

The centre of the park is where United easily have the most depth in, with Mourinho also having Ander Herrera, Jesse Lingard (can also take up a more attacking position), Marouane Fellaini, Andreas Pereira, and Scott McTominay to pick from this season.

Pereira didn’t have the best of seasons with Valencia on loan last season but seems adamant about fighting for his place at United next season. On tour, he’s played in a deep midfield role rather than one of the attacking positions. His versatility will be seen as a bonus in Mourinho’s eyes.

It remains to be seen if we’ll see another midfield signing, although I am of the view United need more quality in the middle of the park. However, part of that is down to not exactly knowing what to expect from Fred.

The personnel is there (well, almost), but are the methods?

It has been questioned in the past whether Mourinho coaches attacking football. If you watch United, you must admit that it doesn’t always look that way.

Anthony Martial wants to leave and Mourinho will willing to grant the Frenchman his wish, though Ed Woodward is reluctant due to the likelihood of him developing into a world beater elsewhere. The former AS Monaco front man started last season well before looking less arsed as time went on, which angered the boss and led to public outbursts.

Marcus Rashford wasn’t entirely satisfied after having his game time cut – like Martial – following the January arrival of Alexis Sanchez.

A club like United should have depth throughout the squad and if a player doesn’t fancy a challenge, he should move to a lesser club where players walk into the team.

Romelu Lukaku got his head down, improved his game and scored goals. I’m expecting a big second season for the Belgian after he lit up the World Cup, with Roberto Martinez’s men finishing third after beating England in the play-off.

The problem is on the right side of United’s attack. If we don’t sign Willian, Ante Rebic or Bale, I expect chopping and changing between Lingard and Juan Mata. 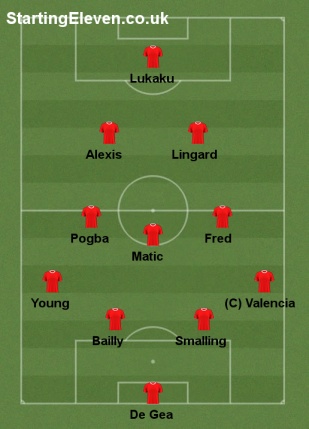