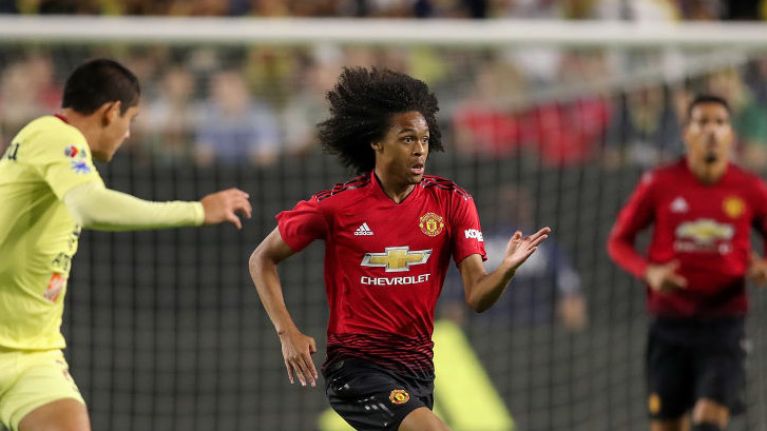 As the football world reflects and struggles through the post World-Cup apocalypse, life at United continues apace. It’s a youthful squad that has jetted Stateside for Tour 2018, with several rookies and Academy graduates included in the traveling party as United’s World Cup stars enjoy a well-earned breather.

Ahead of the next pre-season clash against the San Jose Earthquakes, we take a look at five of the best young United starlets who will get their moment to shine across the pond, and maybe even stake a claim for the first team with the 2018-19 season on the horizon.

Greenwood started his career in midfield pushing through as a No.10, but the 16-year-old, already capped by England at Under-17 level, has since evolved into an out-an-out striker, scoring 17 times in as many starts for Kieran McKenna’s title-winning Academy U18 team last term.

It’s unlikely that Greenwood will feature much, if at all, against San Jose Earthquakes, AC Milan, Liverpool and Real Madrid, but the fact that he is on the tour in the first place shows just how highly he is rated. Born to a family of athletes (his sister is a runner at Manchester Metropolitan University on a scholarship), Greenwood himself isn’t slow, which – coupled with his natural goalscoring ability, makes him one to watch for the future. When the U19s beat Real Madrid to win the ICGT competition in the Netherlands in May, it was player of the tournament Greenwood who hit the winner.

Another member of the famed Fletcher Moss alumni – the local club that produced Jesse Lingard and Marcus Rashford, to name but two. Williams, likened to Paul Pogba in build and style, has already had a taste of life at the top level when he was called up to the United first team under Louis van Gaal, for cup ties against West Ham and Liverpool in March 2016. He was an unused substitute on both occasions, but his inclusion sent pulses racing that this prestigious and highly-rated young centre-back was set to be unleashed as the latest talent fresh off United’s revered homegrown conveyor belt.

He has captained United at Under 18 level but now a regular for the Reserves, international recognition has also come the way of Williams, when he made his England Under-19 debut in 2016. He previously played for country at the Under 17 World Cup. A pacy defender blessed with a commanding physique and presence, Williams is out to make his mark on the first team.

With Alexis Sanchez untimely visa issues that have ruled the Chilean out of the US tour, opportunity knocks for Curacao-born Tahith Chong, the tricky young Dutchman with the Marouane Fellaini-esque hairstyle. After a stellar season across United’s younger age group sides, the Jimmy Murphy Young Player of the Year has long been touted for first team stardom. With a scarcity of options in attack, Chong is in line to feature in the tour opener against Club America, and – remarkably – is one of the few natural wingers at Jose Mourinho’s disposal.

Given how United have priorities the signing of a top class defender, it seems that will still be the case when the transfer window closes next month. The 18-year-old was signed from Feyenoord in his native Netherlands in 2016 and immediately caught the eye as part of Kieran McKenna’s Under 18 side, quickly announcing himself in his debut season with a stunning strike in the FA Youth Cup at Old Trafford, under the gaze of Mourinho. Despite being only 18, Chong has already been elevated to the Under 23 side.

Garner is set to be given his first opportunity of life in the United first team on the US Tour. The 17 year old, who has also been deployed as a centre-back on occasions, is already making rapid progress in his fledgling career. Having made his debut for McKenna’s Under-18s just over a year ago, Birkenhead-born Garner has only played one full season at that level, signing his first professional contract with the club in May, as United topped the northern section of the Under-18 Premier League before defeat to Chelsea in the national final.

Garner has shown glimpses of his leadership potential, having captained both club and country at age group level, skippering England’s young Lions to the semi-finals of the Under 17 European Championships earlier this year. Known for his energy, vision,  passing range and all-action box-to-box style, Garner was nominated for the Jimmy Murphy Young Player of the Year award. With Michael Carrick – who has raved about Garner –  now a member of the first team backroom staff, hopes are high that United’s legendary playmaker can pass on his infinite wisdom to a player who could go on to become his natural successor in the engine room.

A young Scot looking to follow in the footsteps of homegrown compatriots Darren Fletcher and Scott McTominay, Hamilton has already been a part of Jose Mourinho’s first team picture, albeit only briefly. With Paul Pogba ruled out through illness, Hamilton was handed a place on the bench for United’s FA Cup fifth round tie at Huddersfield in February this year. As a midfield enforcer who sits deep and breaks up play, there have inevitably been comparisons with United legend Roy Keane by some, but in the modern era Hamilton’s rangy physique and unstinting stamina is more akin to that of classy Serbian Nemanja Matic. Two-footed and versatile, he has also played as a full-back for the club’s Under 18 and Under 23 sides, having captained both age group sides so far in his young career.

Having contributed impressively across both the Premier League International Cup and UEFA Youth League campaigns last season, Hamilton – who has played for Scotland under his United coach Ricky Sbragia at U19 and U21 level – was nominated for the Denzil Haroun Reserve Player of the Year Award and signed a new professional contract at Old Trafford only last week.