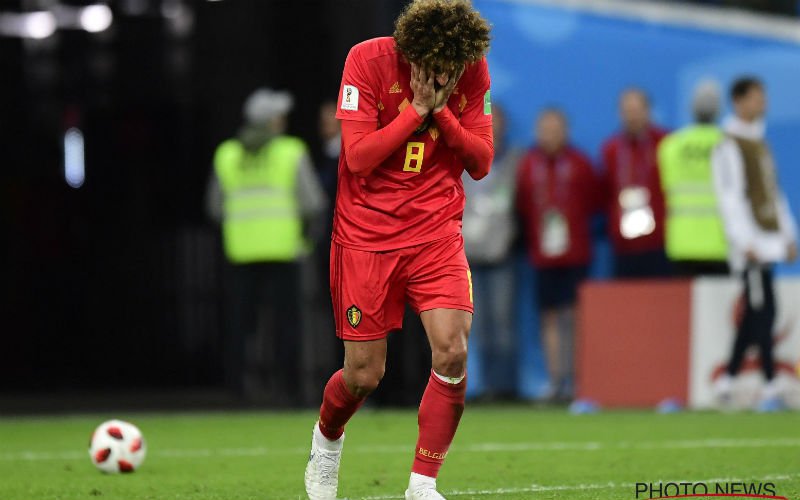 You see, he’s one man is that Fellaini. But he triggers so many moods in me it’s difficult to sum up how I actually feel about him.

In his time at Manchester United, he’s represented so many glorious and painful memories of what is happening at United since Sir Alex Ferguson retired.

When it was announced that David Moyes was joining United, I got vaguely excited, don’t mock me too hard, many of us did I’m sure. Being a bit simple-minded, I thought, he’ll bring his best boys with him. As I drew that list up in my mind, Fellaini was high on it! In his games against us for Everton, he was unplayable!! On the floor or in the air he destroyed us. With soul-crushing frequency, he delivered performances that got the better of us. Perhaps most of all, he’s a sinister violent bastard, something our midfield has been lacking in the years since Keane talked himself out of the club.

But here’s where the problems begin. The timing of his signing, it being after a clause expired bumping his price up significantly. It being made after failing in every attempt to sign any player that defending champions should be aiming for if they’re to build on the previous season. It all triggered sinking feelings in many reds that the men replacing Sir Alex and David Gill were far from up to the job. Before he’d even kicked a ball in a United shirt, he represented failure at the club on so so so many levels!! This impression was continued in his first season at United. He was a shambles, the ultimate shambles!! Technically shite and despite being 9 feet tall with his hair, he played like a scared 4-year-old any time he put the shirt on. If I’m being fair though, it was difficult to find anyone who wasn’t a shambolic mess at United in that season.

There were significant improvements in his second season. Used to greater effect by Louis van Gaal, he often delivered some key performances in big games that helped United return to the Champions League. He was still some way from the absolute machine he’d been at Everton, but he was becoming a much more productive element of the team, right up to his moment of absolute dickhead at Hull that saw him sent off and misses the start of his third season.

When we were looking to crack on and make sure we had a squad capable of delivering something tangible in our return to the Champions League, he was high on the list of players that many fans wanted to see the club sell on.

When he stayed, I was hopeful it was a sign that he’d kick on. That the tiny steps he’d taken in the right direction in his second season, would become the giant leaps he’d take in 15/16. Again, as with MANY of his colleagues in that campaign, there was the odd game where he delivered, but nowhere near consistently enough to feel he was a long-term blessing. But then I look back at the key moments of that FA Cup run. The crucial roles he played in the win at West Ham. His hugely significant role in getting past his old club in the semi-final. His vital role in getting level in the final that we went on to win.

He’s just so incredibly infuriating. When he’s played to his strengths as he was here. As he was during Mourinho’s first season, he’s a player that has a habit of making things happen. Few players played as big a role as him in the trophies won in 16/17, but here’s where he’s not played to his very limited set of strengths, he’s often a handicap we can’t overcome! For all that he did to help drag us to Europa League glory in 16/17, his absolute shit show against Sevilla played a huge part in us wasting a draw that was effectively a pass to the next round if we hadn’t been so utterly shit!

When I thought he was leaving I was genuinely delighted. As much as I love the good times he’s helped deliver at United, his existence at the club leaves a taint on things. It’s like I just can’t enjoy something he’s connected to. For the many positives he’s been involved in at United, I just can’t overlook that sinking feeling I get in my stomach when I see he’s starting, or that he’s coming off the bench. He’s just such a unique/massive pain in the arse!!

I just can’t handle another two-years of watching a player who is so up and down in his purpose, and his relevance, that the mention of his name makes me squirm. I don’t believe in a god, but if I did, I’d be praying to he, she, it that by the time the January window closes, he’s doing some cringe-inducing unveiling video for a poverty side in a Poundland league. It’s the only thing that’ll give my shallow mind the peace it needs to look forward to what a reliable and functional United team can do without him.