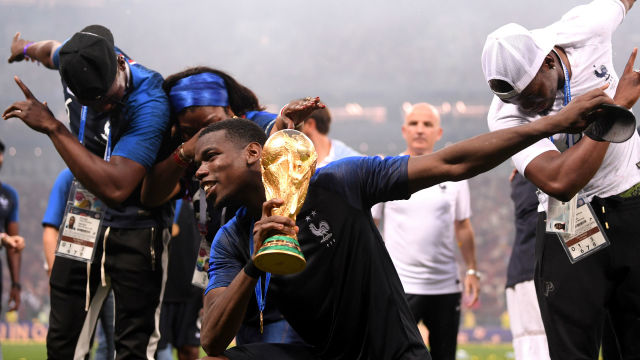 Paul Pogba dedicated his World Cup triumph with France to his late father, which inspired artist BossLogic to design a piece of work.

After winning the World Cup on Sunday, following a 4-2 win over Croatia, the Manchester United midfielder posed with the trophy on the pitch in Moscow, holding his pair of shinpads.

Pictured on the shinpads was a photo of Pogba’s father, Fassou Antoine, who passed away last May aged 79.

In French, it reads: “Oh Lord, do not chastise me for what they say.

“Forgive me for what they do not know and make me better than what they think of me.”

It’s obviously a very emotional time for Pogba – winning the World Cup and having the rest of his family surrounding him on the pitch. He danced, hugged and celebrated the triumph with his mother and brothers.

In a touching tribute, BossLogic has designed the following image dedicated to Pogba and his father.

“Oh If You Could See Me Now” After seeing the photo of Paul dedicating his & France’s triumph to his late Father (Not ashamed to admit I got super emotional when I saw it) I dedicate this piece to you and your family @paulpogba I’m certain he’d be so damn proud. #Pogba #WorldCup #WorldCup2018

Hopefully, it crosses Pogba’s path and the artist gets the credit he deserves.