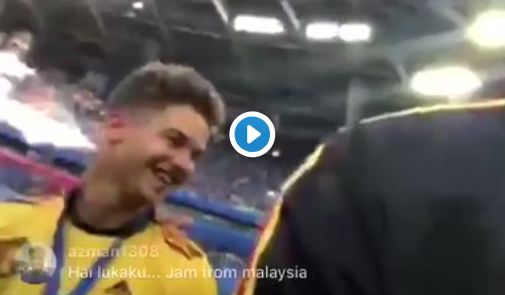 The Belgian pair were filmed on the pitch together on Lukaku’s Instagram after Saturday’s World Cup third-place playoff match against England.

Belgium won 2-0 as they collected the pointless bronze prize in a game neither side looked overly arsed about from the minute the match kicked-off.

READ MORE: Jose Mourinho confirms which Man Utd players will miss the start of the season

Lukaku couldn’t help asking Courtois where he was going, which sounded a lot like pressing his international team-mate over his future at Stamford Bridge.

Chelsea fans are not likely to react well to this footage even though there has been ongoing speculation over Courtois’ future.

Courtois reacted by insisting he was heading home to London and that ‘London is Blue’.

HLN in Belgium previously claimed that the 27-year-old is in advanced talks to join Real Madrid, while transfer Godfather, Gianluca Di Marzio, has linked Chelsea with a move for Roma shot-stopper Alisson as his replacement.