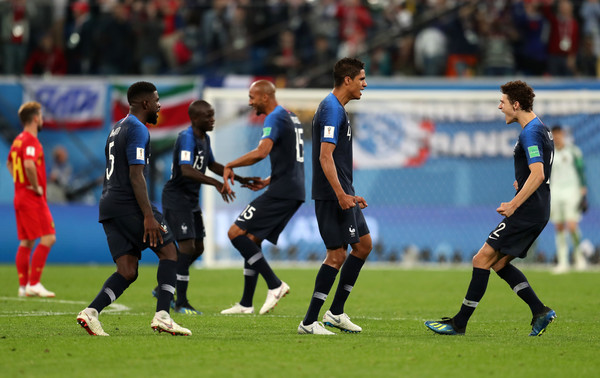 Manchester United should have scouts watching the World Cup final later today. It is the sporting occasion that goes beyond more borders than any other, the biggest of all, and it also captures the imagination of more people than any other.

If you’re playing at that level, you can go straight into a top team and that’s why Jose Mourinho should have scouts to evaluate both sides as France take on Croatia.

There are at least four potential signings from this impressive Croatia squad, with Ivan Perisic rekindling interest from a year ago, Mario Mandzukic rising to the occasion with two goals to his name throughout the tournament, and Sime Vrsaljko putting clubs in search of full-backs on red alert.

Another Croatian linked with United this summer is Frankfurt star Ante Rebic, with The Sun claiming the Reds are set to launch a £44 million bid once the World Cup concludes. Like Perisic, Rebic plays on the wing, although he’s not been on our radar for as long as the Inter Milan star. A recent report from Get French Football News states that talks to land the 29-year-old may already be at an advanced stage.

When you consider Anthony Martial’s wishes to leave the club this summer, as per MEN, it’s no wonder United are constantly being linked with wingers. Mandzukic will feature as a striker in the final, despite playing a wider role for Juventus, and Mourinho could see the Croatia international as a potential backup option to Romelu Lukaku. His future is currently in the air following Cristiano Ronaldo’s arrival, which was announced earlier this summer.

Versatile Atletico Madrid full-back Vrsaljko is also being touted as a target. The Daily Mirror linked the 26-year-old with the Reds a couple of months ago and the arrival of FC Porto right-back has not put Mourinho off looking at alternatives.

Vrsaljko could be a more ready-made upgrade on the ageing Antonio Valencia to go immediately into the team.

This week’s editorial already looked at a World Cup standout full-back, who can also play centre-back, and he faces Croatia in the final. Stuttgart’s Benjamin Pavard has been exceptional and it will be intriguing to see the 22-year-old feature in today’s final after his call-up shocked the nation not too long ago.

However, Pavard isn’t the only French player I’d like United scouts to keep an eye on in the eagerly anticipated final. Raphael Varane is one of the best centre-backs in world football, aged 25 with four Champions League titles to his name, and it’s an area Mourinho really needs to bolster. The Daily Express linked us with the Real Madrid defender a month ago, but it would be extremely difficult to lure him away from the European champions.

It may well be the case that none of these players have set alarm bells off in Manchester, but these are the names we’ve constantly been linked with this summer. Some have performed better than others but that’s football; it’s not up to the scouts and Mourinho to make the final decision.

Other than the five targets mentioned, United have Paul Pogba in midfield for France to monitor. He’s had a good tournament but today everyone connected with the mighty Reds would love to see him shine on the biggest stage.

Let us know in the comment section if any players from the World Cup left you impressed?