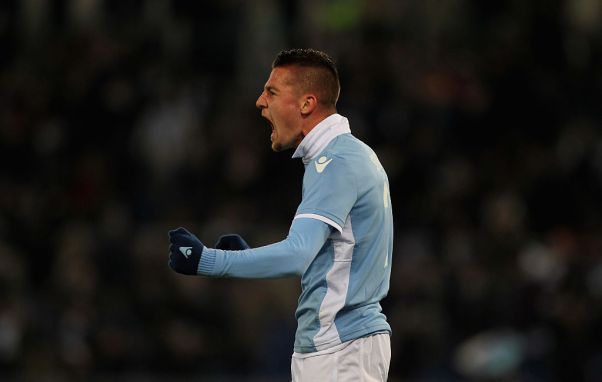 The Serbia international has become one of the most sought-after properties in Europe because of his performances for Lazio over the last two seasons.

Corriere dello Sport report, as per CalicoMercato, that Chelsea are set to join the race for Milinkovic-Savic, with new manager Maurizio Sarri interested in bringing the player to Stamford Bridge before the transfer window shuts in three weeks.

It will be intriguing to see if Sarri gets his own way since that was among the reasons Antonio Conte became fed up working with Chelsea owner Roman Abramovich, who brought in players such as Danny Drinkwater and Ross Barkley knowing the Italian coach had no interest whatsoever working with those players.

This all happened after Conte made winning the 2016-17 Premier League title look easy. The difficulties Chelsea and their former manager endured trying to maintain and build upon what was achieved illustrated just how remarkable that campaign was for the Blues.

It wasn’t long before Conte found the same old figures pointing directly at him – the same shit Jose Mourinho had to deal with at that club before moving on and eventually getting the job he always dreamed of. Manchester United.

Chelsea became toothless like they usually do, and I fully expect the same to happen when the players and Abramovich get sick of their Sarri. It’s a circus at Stamford Bridge. Always has been, always will…

Coaching stability is not something that can be boasted around Chelsea and it is something potential signings should consider before joining the club. Milinkovic-Savic has been touted around Europe this summer, with the following clubs all linked with the player at some stage during this transfer window: United, Juventus, Real Madrid, Barcelona, Paris Saint-Germain.

Juventus are unlikely to splurge the money that Lazio demand for SMS after going all out to lure Cristiano Ronaldo away from Real Madrid, who could use that money to sign the Serbian, but United could also do with another big midfield acquisition.

We must not forget Barcelona, Chelsea and PSG, all who have money and could do with a player like SMS to strengthen their midfielders ahead of the upcoming domestic campaign. The La Liga champions are in the process of replacing midfield duo Andres Iniesta and Paulinho, Chelsea need a squad revamp and the Ligue 1 giants are seeking top players to deliver the holy grail, also known as the Champions League.

Wherever SMS ends up this summer, we credit his entourage for milking the headlines and speculation pages. It’s been a rather busy summer with the World Cup.