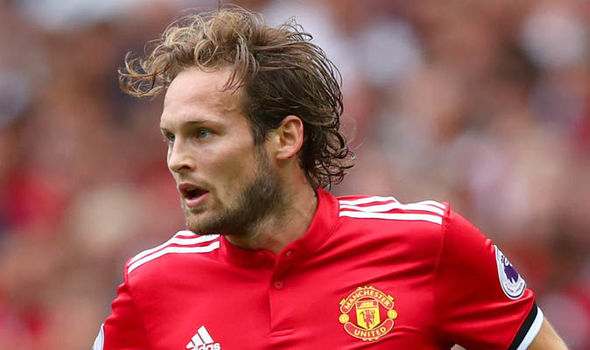 Daley Blind’s days at Manchester United are numbered as the Netherlands international nears a return to Ajax.

According to Sky Sports, the Eredivisie giants will pay an initial fee of £14.1 million which may well rise to £18.5 million.

The 28-year-old joined the Reds from Ajax back in 2014 and he has been a decent acquisition for cover in defence as well as midfield.

However, Jose Mourinho was unwilling to play Blind in midfield last season even when Nemanja Matic clearly needed a rest and Michael Carrick was dealing with a heart condition.

It’s clear at this stage that Blind is no longer a part of Mourinho’s first-team plans and therefore a move away is the best for all parties. At Ajax, he will be able to regain his form and confidence with regular first-team football.

His arrival will give Ajax some much-needed depth and tactical flexibility.

Here is how United fans reacted to the news:

Pure footballer pity he has no pace, a joy to watch.

Daley Blind has been decent for #mufc. Frugal buy, excellent at left-back and centre-back for Van Gaal and first season under Mourinho was bookended by brilliant form. Was exceptional in the Europa League final. Last season was a shocker.

Only mystery that remains for me is why Blind wasn’t at least given a go by Jose as #MUFC’s CDM. Not dissimilar to Carrick in his ability to control pace of a game, pick an incisive pass, remain composed. His discipline could’ve freed up likes of Pogba/Fred/Fellaini alongside him

What is it with United fans who get all gay on outgoing players? Not good enough,not playing, fuck them off and replace with better it’s not rocket science #MUFC #Blind

Wish we had seen more of this from Daley Blind. Unbelieveable passing range! #mufc pic.twitter.com/T35cgKhRzl

Best of luck to Daley Blind. Thanks for saving our asses in defense during the Lvg years. Should have been played much, much more in midfield for us. Decent, honest player. Good business for both parties 👍

Sad to see Blind go – intelligent footballer who can play many positions. Had all the qualities to replace Carrick but was never going to make it as a CB. Good luck at @AFCAjax @BlindDaley #MUFC 🔴⚫⚪ pic.twitter.com/qJteGrEJa9

Shame that Daley Blind played for Man Utd at a time when the club was in a transitioning phase. One of the most intelligent & versatile players we’ve ever had.

Chipped in with some crucial goals & was generally efficient whenever he played. Hope he does well at @AFCAjax.