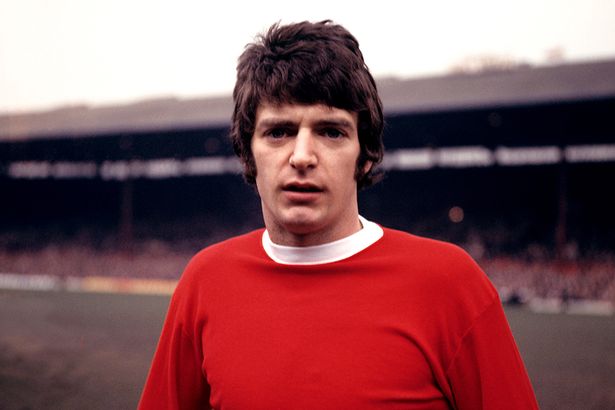 Having begun his career at Burnley, Willie Morgan joined Manchester United in 1968 and took the number 7 shirt from George Best. Quite a way to introduce yourself.

Morgan went on to make 296 appearances for the Reds, scoring 34 goals along the way. Furthermore, he captained United back to the First Division at the first time of asking in 1975, following the clubs relegation in 1974.

He endeared himself with the Old Trafford faithful from the outset and the Stretford End chanted his name on his debut against Tottenham. Twice voted player of the season, Morgan will be remembered as the sunshine in an otherwise dark period in the history of United.

This week, I got in touch with the Scot and we talked about his time at the club as well as the current crop of stars in Red.

Morning Willie. Tell us how your move to United come about?

Morning Jimmy. I was actually going to go to Leeds United from Burnley; but then United came in, I remember, on Friday night. I went over and I signed for the club on Saturday morning. It was that quick. I can assure you that Don Revie wasn’t very happy! He thought I was going to Leeds!

Why do you think United failed to build on the 1968 European Cup win?

I think the team was getting old. A lot of the lads were at the end of their careers. It takes some time to rebuild. However, those few years with Sir Matt were great. Having said that, we reached the semi-final the following year, and we were robbed by A.C Milan!

We scored a perfectly good goal which would have brought us level but the referee didn’t give it. Otherwise, we would have been in the final again and who knows what could have happened. If we had VAR, we would have got the goal; but there was none of that in those days!

Tell me a bit about Sir Matt.

He was fantastic. Arguably, the greatest manager of all-time. It was a great time. We were like one big happy family; a special time.

What was your relationship with George Best like? How did he take it when you asked for the number 7 shirt?

I signed on a Saturday and I trained for the first time with the team on Monday. George took me out for lunch after training in Manchester and we became great friends after that. There was never any animosity or problems. None at all. It looked better on me than him anyway!

It’s difficult to compare because we are talking about different eras, but for you, how do people like George Best and Pele compare to the likes of Ronaldo or Messi?

I think the greatest player of all-time is Pele, without a shadow of a doubt. He is out on his own but there are some great players just behind him; George being one. With regards to now, Messi is ahead of Ronaldo. Ronaldo is a great goal-scorer, but he is not in the same league as Messi.

There is an argument that Messi is the greatest player to ever walk the planet, and I never thought I would see anyone as good as Pele. He is truly tremendous; an amazing player. I believe he could have played in any era. He is that good.

Jose Mourinho continues to divide opinion. What is your verdict: progression or not?

He is not doing a very job at the moment for me. The football is dreadful. Absolutely dreadful; and he has arguably one of the best young talents in the world at the moment in Marcus Rashford. The kid is tremendous but he will struggle in the system that Mourinho is employing at the moment. I’m not sure about Jose. I would love him to be successful but the players he is buying leaves a lot to be desired. We will see next year. Fingers crossed.

What do you want to see change then?

I want to see them attack teams. He needs to get rid of about eight players that are not good enough and give more freedom to the likes of Lingard, Rashford and Martial. Having said that, it looks like Martial will go. However, there is no simple answer and I think it will take some time. There are some very average players at United right now. I think the supporters are scratching their heads at the minute.

You touched on the Martial situation there. Where do you stand on that? Is it a case of he has blown too many chances or do you think he has been unfairly treated?

I think he has been treated unfairly. He could be a very good player for United but you have to give the kid a regular position. It’s the same with Rashford. It can destroy your confidence, being asked to fill in here and there.

Final question. Knowing what you know now, what advice would you give a young Willie Morgan?

Stay away from coaches! I think they ruin the game. The take the talent out of a player and turn them into a robot. Players now are coached to play it safe or keep possession. You have to let kids play and express themselves.

Having spoken to Willie Morgan, it is clear he shares the feelings of a lot of United supporters in that undoubtedly, the players are there to be a lot easier on the eye. Rashford is one of the most talented and exciting players I have seen come through to the first team during my time as a fan.

The worry is that the current approach stifles his talent and I am not sure Jose is the man to get the best out of him, but only time will tell.

In addition, it was great to listen to Willie’s stories about his time as a Manchester United player and to speak to somebody who knew George Best and Matt Busby first hand. True legends of our club.

On Wednesday, we will share an interview with another legend of our club: Alex Stepney; a key component of the 1968 European Cup Win.

You can also buy a copy of Willie Morgan’s autobiography, On The Wing, to read more about his life and career. As you can see from the interview we’ve had the pleasure to run, Willie is an outspoken character. We love that.