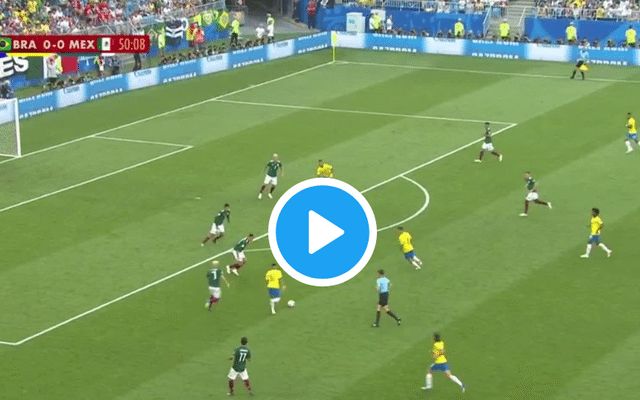 Despite making a very positive start to the game, Mexico were eliminated from the World Cup following a 2-0 defeat at the hands of Brazil.

Mexico will have been delighted early on as their high-tempo attacking play appeared to be causing Brazil problems.

Tite’s men began to compose themselves though and grew into the game as the first-half went on, as they carved open opportunities of their own to suggest that they were beginning to settle into the game.

It remained goalless heading into the half-time interval, but it didn’t stay that way for long after Neymar cut inside and found Manchester United target Willian with a wonderful back-heel. Then, the Chelsea winger used his breath-taking pace to get past his man and find space before picking out Neymar inside the box as he slid home the opening goal.

Brazil have been hit and miss at this tournament, but they’ve shown glimpses of their class and look solid as a unit for the most part. They will be highly fancied to do damage in the latter rounds.

Enjoy Willian’s assist below and let us know if you’d like to see him at United this summer?

GOAL! A one-two made in Brazil. Neymar backheels to Willian who drives into the box before laying it on a plate for Neymar at the back post from close range pic.twitter.com/joILjQClU3