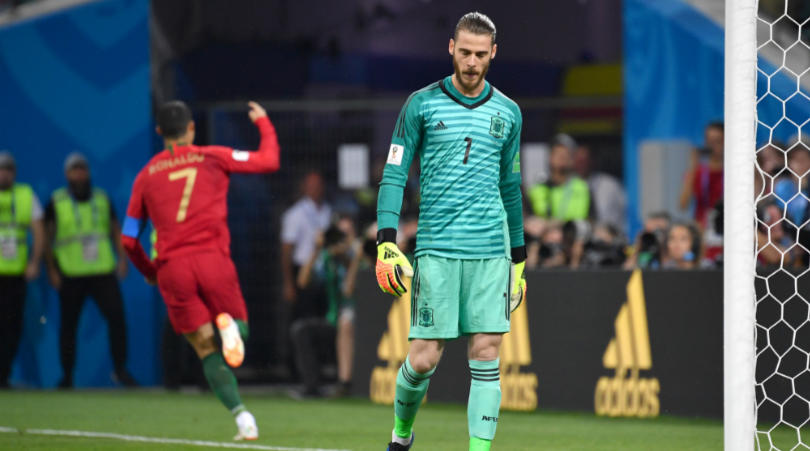 David De Gea has come in for widespread criticism from Spanish followers during this summer’s World Cup. He has copped it left, right and centre from a vast array of people, including their former national keeper Santiago Canizares. He was no doubt a very good goalkeeper in his day, but his criticism of De Gea would be akin to say Neville Southall picking holes in Gordon Banks’ game.

The stick he has been on the receiving end of has been frankly deplorable and dumbfounding. Instead of lambasting the chief culprits against Morocco for the opening goal in Andres Iniesta and Sergio Ramos, untouchables at international level, the microscope focused on De Gea getting nutmegged in an unenviable one on one situation. Far less was mentioned on De Gea saving Spain’s bacon when he dealt far better and stronger with a second one on one moments after Isco had equalised.

It was not just the Spaniard’s third game of the group which was brought into question: Of course, there was no legislating for the inexplicable fumbling of Cristiano Ronaldo’s gun barrel straight shot, believe it or not, De Gea actually is human. No, he has been bizarrely rebuked for the positioning of his wall for Ronaldo’s stunning free-kick, with the setup supposedly for a left-footer rather than Ronaldo’s rocket right. Can we not just admire the strike from a phenomenal powerhouse of the game? It invariably takes something special to beat a man of De Gea’s calibre and special it was.

Canizares has now claimed that De Gea is ‘transparently not confident’, with speculation rife that he could be set to be dropped. Because slagging the guy off even more is going to do wonders for that apparently fragile confidence, Santiago!

That therein is exactly why De Gea is set to commit to United into his thirties and has not actively angled for a move to his homeland, where he is incessantly slaughtered.

United fans were worried that Real Madrid’s new manager Julen Lopetegui would re-open old wounds and attempt to sign De Gea, given he was his number one for his country. Truth is that De Gea is not appreciated or loved in Spain anywhere near the level that he will continue to be at United.

He is treasured at United, scapegoated in Spain.

You just cannot measure the importance of having a great goalkeeper and the fact De Gea is talked about in Manchester in the same breath as Schmeichel and Van Der Sar emphasises just how good he has been for United and vice versa. That debate will rumble on for years, even generations.

What cannot be debated is De Gea committing his future to United is an incredible coup and signing of the summer, maybe even Mourinho’s tenure.

De Gea is here to stay, somewhere he is genuinely appreciated.