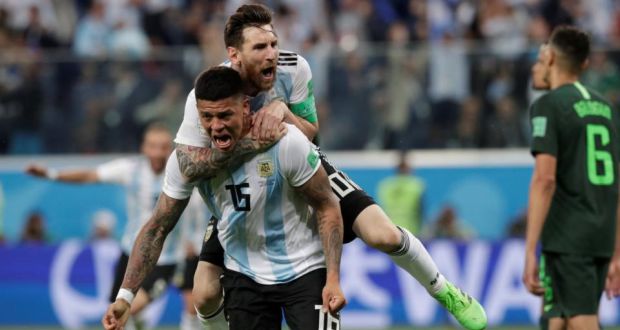 Finally, at this World Cup, Lionel Messi stepped up as Argentina grabbed a crucial victory over African nation Nigeria to finish second and qualify for the knockout stages.

After struggling to get going in his first two games, while everyone else gleamed over Cristiano Ronaldo, a lot were guilty of silly knee-jerk reactions.

Last night, the five-time Ballon d’Or winner reminded us of his incredible talents in the first-half with a beautiful goal to open the scoring. It was his first goal of the tournament.

The Barcelona star abolished the myth last night that he’s unable to do it for his country and it has since been revealed that he gave an inspirational half-time team talk in the tunnel to his teammates.

Argentina were 1-0 up at this point before Victor Moses equalised with a penalty just after the interval.

Then, Manchester United defender Marcos Rojo became a hero for his country by making his way into the box to provide a sublime volleyed winner four minutes from time.

The match-winner not only credited Messi as giving the players a confidence boost with his words of wisdom but also advising them to push forward as much as possible in the second-half.

“Messi came up to us and told us to calm down and not be stressed,” Rojo said post-match.

“We felt nervous and that message helped us a lot and gave me personally a huge confidence boost.

“Messi is our captain and he’s the best captain in the world, it was amazing to score that goal. Messi told everyone that it was either life or death. It could’ve gone badly. We could’ve conceded but Leo was stubborn.

“He told me to run forward. Even [Javier] Mascherano. He told everyone to attack no matter what. He truly read the game and risks. He’s a leader. The best.”

Jorge Sampaoli’s side have been bang average thus far but will now take on France, another team who need to get going for the latter stages of the tournament.

Marcos Rojo loves a winner against Nigeria at the #WorldCup