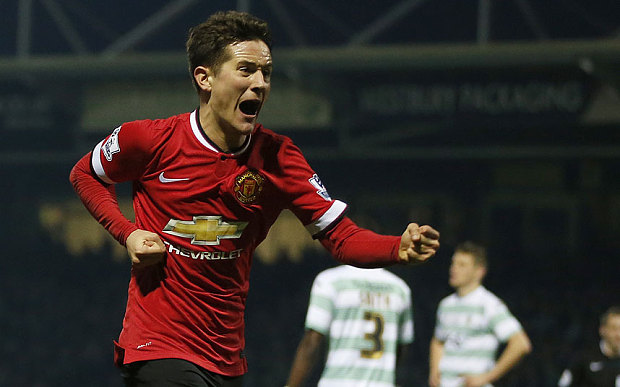 On this day in 2014, Ander Herrera signed for Manchester United from Athletic Bilbao in a deal worth £29 million. He has since made 161 appearances for the club, scoring 17 goals.

Ander was the first signing of the Louis van Gaal era and has become an important member of our squad; winning the Sir Matt Busby Player of the Year Award in the 2016/17 season.

Furthermore, the Spaniard was voted United’s Player of the Year by our fans as his tireless performances and effort did not go unnoticed. Herrera wears his heart on his sleeve and takes great pride in status as a Manchester United player: ”I know I am not English and I am not from Manchester, but I really love this club!”.

It is not difficult to see why he is a firm fans favourite!

With that in mind, here are my top three Herrera moments in a Red shirt.

This goal truly announced Herrera to the Old Trafford faithful in his first season at the club. United were headed towards an uninspiring 0-0 draw at Huish Park in the third round of the FA Cup after a poor display against The Glovers.

Yeovil came into this game at the bottom of League One but matched United for large parts of the game in a spirited display. After a dull goalless first half, Herrera struck on the hour as he latched onto a Darren Fletcher pass and smashed the ball into the net from 25 yards out, giving the goalkeeper no chance. Angel Di Maria scored the other goal as United avoided the embarrassment of a giant-killing.

This game highlights the trust Jose Mourinho has in Herrera and he must be commended for his discipline and persistence which sacrificed his own game to nullify the threat of Eden Hazard. He did a number on the Belgian that day; Hazard did not have a kick as Utd beat their rivals 2-0.

His man-marking display was key to the victory that day as Mourinho devised a plan to stifle the Blues’ main threat. Moreover, his deflected effort gave United the cushion they needed to complete an outstanding performance from the Spaniard.

United came into this one feeling the pressure after a below par performance the week before in the defeat against West Brom at Old Trafford. They got off to the worst possible start as Dele Alli struck after just 11 minutes after some poor defending to put Spurs ahead at Wembley.

Alexis Sanchez equalized for the Reds against the run of play after 24 minutes as he headed home a great Paul Pogba cross. The stage was set for somebody in a Red shirt to make themselves a hero; Ander Herrera duly obliged. With 30 minutes left on the clock, his low streak beat Hugo Lloris to fire United into a record-equalling 20th FA Cup final.

We want to hear from you: what are your favourite Ander Herrera moments?