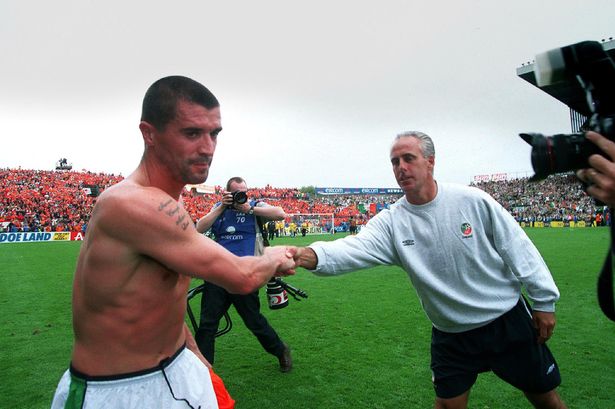 Manchester United legend Roy Keane has “not lost a wink of sleep” over walking out of the 2002 World Cup.

The former Republic of Ireland international was named captain for the World Cup in South Korea and Japan.

Keane walked out before the tournament began after giving an interview to the Irish Times, which angered then manager Mick McCarthy.

READ MORE: ‘Ronaldo out there on his own’ – Roy Keane weighs in on Messi debate

It was the end of Keane’s World Cup — one Ireland can thank him for qualifying for — but he does not hold any regrets over it.

Speaking to ITV sport for their 2018 World Cup coverage, as per The Daily Star, Keane lifted the lid on his feelings towards what is now known as the “Saipan Incident”.

“Later on in the week, I think the night before Saipan, we had a team meeting,” Keane said.

“I was confronted by the manager and I stood up to fight my corner, and I would do it again tomorrow.

“I’ve always said I’ve never lost a wink of sleep about how I reacted to the accusations that were made against me.”

He went on to explain his feelings about missing the rest of the 2002 World Cup.

“Would I have loved to have played in a World Cup? Of course, that’s what the game’s all about.

“I watched the 1982 World Cup, which was brilliant as a kid and you want to get involved, and thank God I played in 1994.

“But you get greedy and selfish, so you want to play in another tournament. It wasn’t to be, but I don’t look back and regret any of my actions.

“I wish it hadn’t happened and things had panned out better, but that’s the way it goes.”

Keane’s stance is there’s no point crying over spilled milk and he’s right. Without dragged myself back into the Keane v McCarthy debate, United and Sir Alex Ferguson were there when Keane needed it most.

Not that Keane required any help — he was well within his right to be pissed off with the set-up in Saipan — but he didn’t get the respect he deserved from the national team at that time.

Now, Keane is assistant manager to Martin O’Neill for the Republic of Ireland. The FAI built a bridge and got over it.