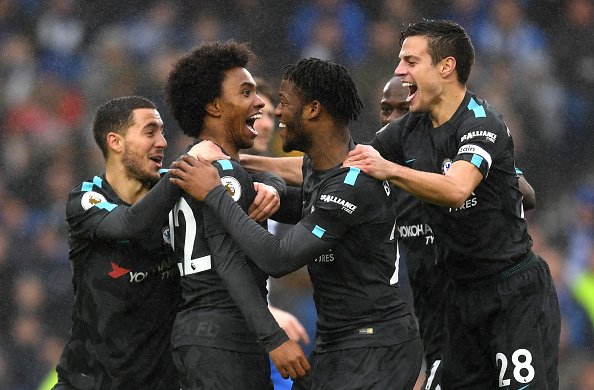 Manchester United are increasingly confident of landing Chelsea star Willian this summer, according to the Manchester Evening News.

The Brazil international has been tipped to join the Old Trafford club in the coming weeks.

Jose Mourinho, who brought the Brazilian to Stamford Bridge, remains a huge admirer of the winger and wants to add him to United’s attack.

The MEN claim United are confident that Chelsea may sell Willian this summer to raise transfer funds for Antonio Conte’s successor.

They even go a step further and say the Reds have held talks with the Blues over a potential transfer.

Should United land Willian this summer, the Brazilian would become the Reds’ third signing after completing deals for Shakhtar Donetsk midfielder Fred, who knows Willian through the national team, and FC Porto full-back Diogo Dalot.

Willian would offer United something on the right-hand side of midfield, after focusing too much on the left the last term.

So many kids in my mentions over Willian 😂. He’s been a good – not great – player for Chelsea, I would swap him in a heartbeat for martial if that’s on the table, and think he’s a decent forward for us. That’s it.