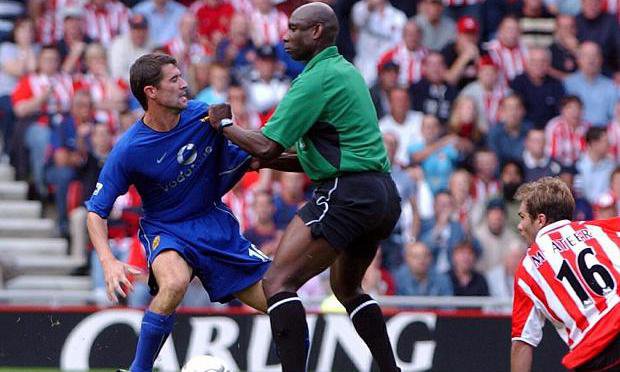 Republic of Ireland manager Martin O’Neill has slagged his assistant Roy Keane for his fiery temper during ITV’s post-match analysis of Brazil’s 2-0 win over Costa Rica on Friday.

It took second-half goals from Philippe Coutinho and Neymar for Brazil to get their first win of the group stage after an opening round draw with Switzerland, however, much of the talk after the game focused on Neymar’s constant bickering with referee Bjorn Kuipers.

Neymar: dives for pen, tells ref not to touch him, calls Costa Rican a ‘puto’ under the ref’s nose, gets a yellow card for dissent, scores to make it 2-0 and does throat-slash gesture to signify the mighty Costa Rica are no more, cries. An unbearable prick.

Keane said afterward that he had learned towards the end of his playing career that arguing with officials would result in less favourable calls towards his team, a point that was quickly picked up on by O’Neill.

“What I thought towards the end of my career, maybe it was a bit late, I used to give referees a hard time,” Keane said before O’Neill interrupted “towards the end of your career? I would have said 15 minutes into it.”

Keane continued: “The penny dropped for me but then you soon realise that the more you give referees hassle, any 50/50 decisions they will go against you but I found that out too late.”

O’Neill countered Keane’s point: ”It’s simply untrue. Especially at Old Trafford when you get 15 men around the referee. He’s going to bottle it.”