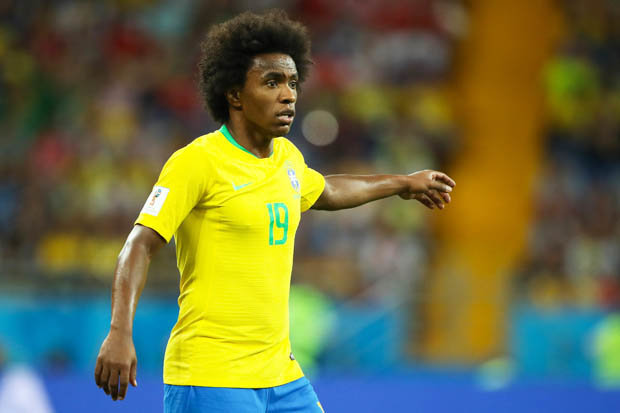 Chelsea fans have called on the club to let Willian leave for Manchester United after the winger’s below-par showing for Brazil in the World Cup this afternoon.

The 29-year-old started their second match of the tournament, which ended in a 2-0 victory over Costa Rica, however, he wasn’t really at the races and Brazil manager Tite decided to take him off at half-time.

Juventus star Douglas Costa replaced Willian and made an immediate impact, helping to turn the game around and now Willian’s starting place for the rest of the World Cup is under threat.

Willian has been linked with a move away from Stamford Bridge this summer after falling out with current Chelsea manager Antonio Conte, who is likely to get the sack this summer.

But, Jose Mourinho is reportedly keen to work with the Brazilian again.

The winger was excellent during Mourinho’s second spell at Chelsea and it has been reported that Mourinho is willing to pay up to £60 million to take him to Old Trafford, as per Sky Sports.

Every time I think Willian was voted the best player for a season, I’m ashamed of being a Chelsea fan.
What a horrible horrible season.

Imagine selling Willian and getting Martial in return 🔥 #chelsea #WorldCup

Willian drops yet another disasterclass and gets subbed off at HT.
What an embarrassment for chelsea fans 😑

Willian making a case for Chelsea to sell him to ManU if they still want him. Especially if they are really offering that price that was reported.

If Mourinho send Martial over to Sarri whilst taking Willian, it’d be the greatest thing he’s ever done for Chelsea. Kinda worried Willian’s mythical “work rate” will fool Sarri into keeping him for another season tho

Finally the world is realising Willian is bang average, about 4 years too late. How he lasted this long at Chelsea baffles me, squad player at best

Bless their cotton socks. Willian has a bad game and, all of a sudden, he’s rubbish. They must have all missed some of Anthony Martial’s performances towards the end of last season.

The French winger is hardly the most consistent.