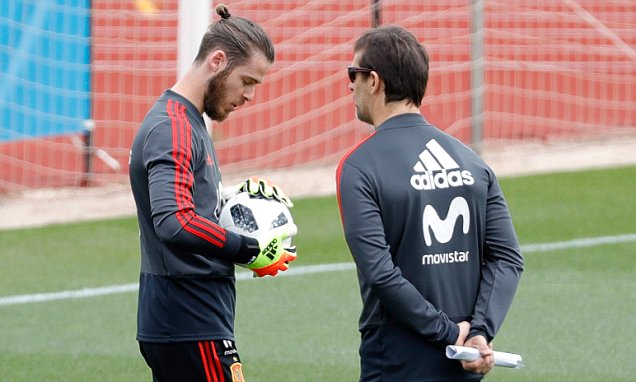 The rumours were bound to kick-off again.

Real Madrid are reportedly set to reignite their interest in Manchester United and Spain no.1 David de Gea after they appointed Julen Lopetegui as their new manager.

The Daily Mail are reporting that Los Blancos confirmed the former FC Porto boss as their new manager and that his arrival has thrown the futures of both Gareth Bale and David de Gea into doubt.

Moreover, it’s even thrown Lopetegui’s future in doubt with reports an angered Spain board could force the new Real Madrid manager to step down a day before the World Cup opening ceremony for not respecting the recent contract he signed to remain Spain boss just last month, as per the Independent.

The Mail are also reporting that Lopetegui has a great relationship with United’s shot-stopper and that this is going to see the La Liga giants reignite their pursuit for the world’s best goalkeeper.

De Gea often wins games for United effectively on his own with his outstanding performances.

The appointment of Lopetegui has already caused quite a stir. As far as we’re concerned, he can fuck off away from De Gea. He’s ours.

I’m not concerned yet… and neither should you!