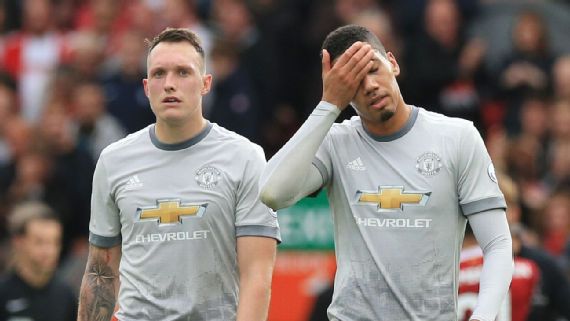 All is well and good spending in excess of £50m for big-name midfielders and forwards whenever the opportunity arises, but it’s about time that money was used to rebuild the defence at Manchester United.

Rivals Manchester City have been ridiculed for investing over £200m on their defence over the past year under Pep Guardiola – Aymeric Laporte (£57m) joined Benjamin Mendy (£49m), Kyle Walker (£45m), Danilo (£27m) and Ederson (£35m) in January.

At Man United, it seems to be the complete opposite, with the £30m capture of Eric Bailly on this day last June the only defensive arrival in recent years that supporters still seem to be content with, and even his short-lived United career has been a strained one so far.

The straightforward truth is if Jose Mourinho wants to lead the club to the success it once achieved so easily, change is needed, and the signing of 19-year-old FC Porto right-back Diogo Dalot being confirmed this week marks a perfect opportunity to do so this summer.

Manchester United could’ve fielded their current defence in 2011-12, no joke…

Fine, Bailly has been struggling with fitness over the 2017-18 season, but that resulted in Antonio Valencia, Chris Smalling, Phil Jones and Ashley Young acting as the first-choice back-line for the majority of the campaign.

Mourinho has seemingly lost all faith in Louis van Gaal’s trio Daley Blind, Luke Shaw and Matteo Darmian – all three may even leave Old Trafford this summer – and doesn’t deem his latest defensive signing Victor Lindelof ready to be a regular starter yet.

Marcos Rojo also faced a battle against injury for the majority of last season, which meant United’s defence had a total of 39 years of experience at the club between them – Valencia (nine), Smalling (eight), Jones and Young (seven).

You can’t deny that full-backs Valencia and Young enjoyed good seasons, so good the latter has salvaged his England career in time for the World Cup, but both are over 30 years of age now while Smalling and Jones continue to struggle to prove that they are actually good enough to start at the back for such a club.

Defensive rejuvenation required and centre-back problem should be prioritised

It has already been confirmed by Mourinho himself that Dalot will act as an understudy for captain Valencia from August onwards, but that’s fine, every defence should have a bit of experience.

A blatant lack of quality at centre-back is the underlying issue though, and United are targeting a £55m move for Tottenham Hotspur star Toby Alderweireld in an attempt to improve the situation.

Sevilla’s Clement Lenglet is believed to be seen as an alternative to Alderweireld, but wouldn’t provide anything much different to Lindelof in the sense that he’s a 22-year-old ball-playing defender – United need experience and quality in one.

It’s crazy how much it would better United’s current centre-back ordeal by bringing in just one experienced player with bags of quality, like Alderweireld who is considered to be one of the best in the country, to partner up with Bailly for the long run.

The full-back situation is better but still far from perfect

Young had one of the seasons of his life throughout 2017-18 in defence after reverting into a left-back under Mourinho, but his presence there can still be only seen as makeshift.

19-year-old Dalot has already been described as “the best young full-back in Europe” by new boss Mourinho after joining for £19m earlier this week, and he can play at left-back, but he is seen as the man to continue Valencia’s legacy at right-back once the Ecuadorian calls it a day.

Shaw’s future at the club is looking bleak after waves of public criticism from his manager on the majority of occasions he actually gets a game, and United are keen to bring in a top quality replacement this summer.

All signs suggest that Mourinho’s preference for a long-term left-back appears to be Juventus’ Alex Sandro who would be a fine acquisition, while Spurs’ Danny Rose and Celtic’s Kieran Tierney have also attracted his interest.

It sounds so simple. Sign a centre and left-back of the calibre required at the level needed to help United achieve what is expected of them, preferably Alderweireld and Sandro amongst supporters, and field out a new-look defence next season.

The chances of challenging Guardiola’s City and their £200m+ defence are almost non-existent if we see Smalling and Jones kick-off at the heart of the defence – both will have a role to play in the squad but that role isn’t as regular starters.

It’s exactly the same with Young – a tremendous squad player who certainly has a role to play. He gets the club and what it’s about, and fans appreciate that, but a club like United can do much, much better.

Only time will tell whether Ed Woodward and co. sort out the dilemma in time for the 2018-19 season, but if they do then United have a great chance of a successful campaign in Mourinho’s third as manager.