Lazio’s Sergej Milinkovic-Savic has been linked quite prominently with Manchester United in recently months, as per the Mirror, and he’s not hiding his admiration for the club on social media. 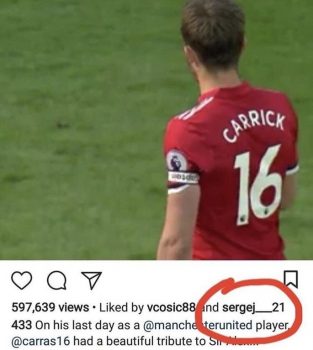 Michael Carrick played his last game at Old Trafford on Sunday when the Reds beat Watford 1-0 in the final Premier League fixture of the 2017/18 season.

That means Jose Mourinho will need to go out this summer and find a replacement for the midfield veteran, who has been a fantastic servant to the club since joining from Tottenham Hotspur in 2006.

Carrick won five Premier League titles, the Champions League, FA Cup, three League Cups and the Europa League during his time at Old Trafford. We hope whoever replaces him this summer — be it Milinkovic-Savic or someone else — has just as much success whilst at the club.

SMS, as he is called in Serbian media, undoubtedly has the necessary physical tools to make it in England.

Despite being born in Spain, Milinković-Savić came through the youth academy of Vojvodina in Serbia, the country he chose to represent at international level, so he would arrive knowing Nemanja Matic rather well.

It will be interesting to see how this saga plays out. He certain looks to be a prime target for Mourinho this summer.