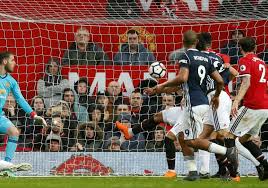 ‘Masters of complication’, United were described in Mourinho’s latest colourful, yet baffling terms. Would us Mancunians translate that as fannying around in possession and expecting for West Brom to just play to expectation and get their arses handed to them?
United should have been riding the crest of a wave following their comeback against City. Instead, it counted for next to little as United woefully handed the title to their neighbours with the weakest and most embarrassing of defeats.
People are directing their anger at Mourinho for his team selection. Focusing particularly on defensive midfielder Ander Herrera here, why would he change a winning setup even if it was against the division’s cannon fodder? That was the way United operated to devastating effect in that twenty minute burst at City and it clearly brought the best out of Paul Pogba and Alexis Sanchez.
Yes, the tactics in trying to repeatedly penetrate the crowded centre of West Brom’s defence were wrong and unmoved, but this was just a subordinate to the greater issue at hand…
Attitude.
Most could sense something was amiss within moments of kick off and that set the tone. An insulting tone.
United thought all that was required was to step off the team bus and they would delay City’s coronation for another week. Players were dawdling in possession and creating next to nothing. Moan at Mourinho all you want, after all he will be the one to get the brunt of the flak, but he cannot play quicker, control his players’ actions on the pitch or get each player switched on. That is their responsibility once they cross the white line.
What a way to burst all the optimism that pissing on City chips brought.
People will talk about team selection, namely Juan Mata being brought in from the cold and going on to have by far and away his worst game in recent memory for United. It was not just Mata with a virtual no-show. You could count the good performers on one hand yesterday, and that’s rather kind in itself. The eleven chosen, had they shown the same intensity and application as against City, would easily have had far too much for West Brom.
The attitude was completely wretched.
The way United played, all Billy big bollocks thinking name alone would steamroller relegation bound opposition, they got their just desserts and were rightfully booed off. It was an insult to the badge and the supporters who had to put up with that whilst getting an almighty drenching.
This United side still requires major surgery: Two full-backs, a commanding centre-back and steely midfielder spring to mind immediately. Another quarter of a billion later and will that even be enough?
Not if that attitude is anything to go by.
You would not have thought there was an upcoming FA Cup semi-final on the horizon, with places up for grabs. Delaying the inevitable may be, but surely that should have acted as sufficient motivation to put on a show? Before that, there’s a midweek trip to Bournemouth and who has any confidence of getting a result after that?
It was a total embarrassment and highlighted just how far the gap has been this season.

One response to “United undo all their hard work at City, and in deplorable fashion”