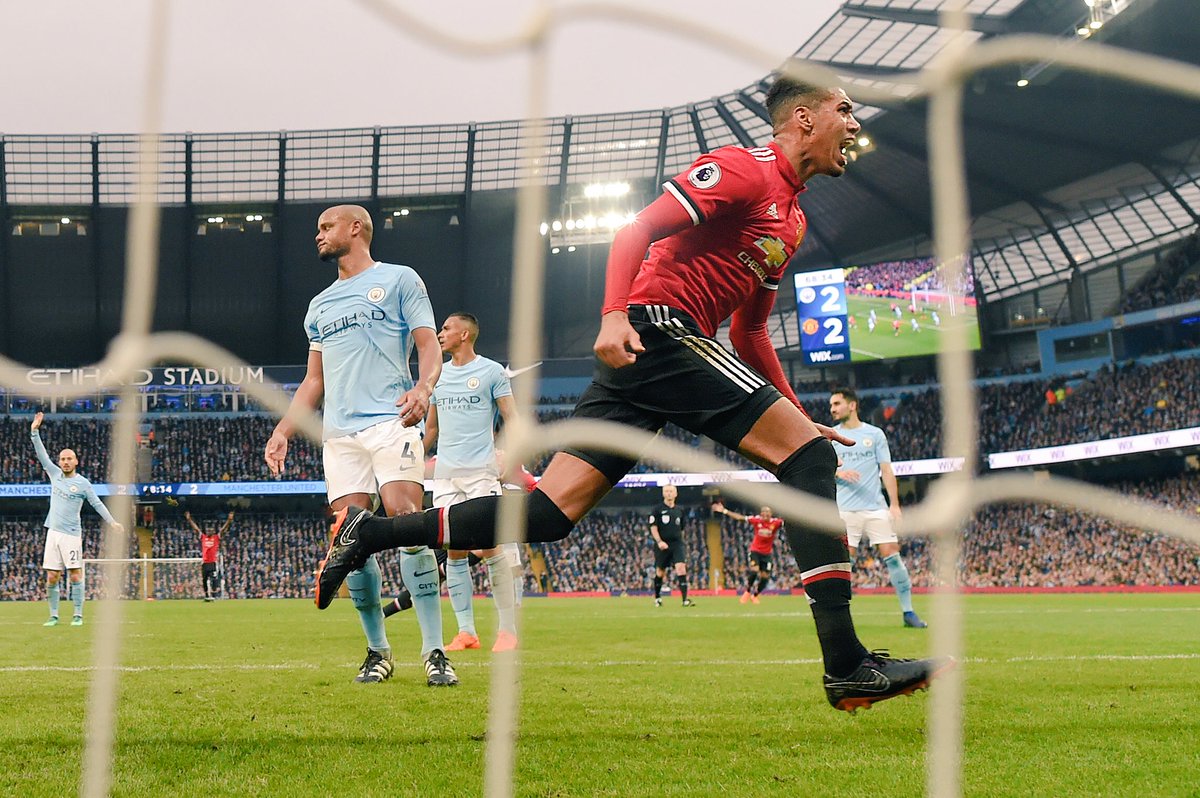 I don’t think a brick wall could have stopped Vincent Kompany from meeting that ball with his head.

If there is any player, post the deep-pocketed sheik’s investment, that has completely bought into the tradition at Manchester City, it is Kompany. The man loves the club and embodies it: you could see it in his desire to meet the ball – Chris Smalling might’ve as well been a puff of breeze for all the effect he had. You could see it in Kompany’s celebration after the ball had gone in – fist pumping unfettered joy. You could also see it, when things turned sour for City – him and Fernandinho double tagging Lingard nicely on the halfway line.

Vincent Kompany is a Manchester City legend. There is no doubt about it.

The thing is though, for every Vincent Kompany Manchester City has, Manchester United has about six. Legends? United have them by the bucket. Trophies? Same thing. Fans? You bettcha.

This is why, even on the brink of history, playing amazing football, beating United mattered so much to City. United defines them; United is the smug faced neighbor they want to punch, the prep school kid who thinks he’s so fancy. To United? City is best summed up in the famous words of Sir Alex Ferguson: “Noisy Neighbours”.

‘Noisy Neighbours’, a phrase hardly used in recent times, especially not now, with the season City are having. Especially not with pundit favourite Pep Guardiola as their manager. However, the two times United faced City this season, it has rung true.

The first, at Old Trafford earlier in the season, finishing 1-2 in City’s favour and hosting the fracas which saw milk aimed at Jose Mourinho, was evidence of just how much their victory was enjoyed. I daresay, it was even more of ‘Guardiola and his boys’ getting one over arch-nemesis Mourinho. Mourinho, who stopped his Barcelona juggernaut with unlikely Inter Milan. The same Mourinho, who chased him out of Spain, winning the league with a record number of points and hounding Guardiola every step of the way.
That 1-2 victory was as much for Guardiola as for City – hence the ‘long-ball Jose’ quips.

Mourinho’s response to the whole thing was brilliant by the way: “a diversity in education, a diversity in behaviour”. Enough said.

The second, at the Etihad, a 2-3 win for Manchester United that pulled the plug on City’s title celebrations for at least another week, showed again just how much getting one over their city rivals meant to the blue half of Manchester.

They had drummed up the event; players, fans and pundits alike. It was to be a proper thumbed nose at their rivals, the match itself was a forgone conclusion.

They were right. At least for the first 45 minutes. Shouting ‘ole!’ at every City pass, the uproar when their goals went in, and singing ‘we are the champions’ just as the first half came to a close. The blue half of Manchester had written their own fairy tale and bought into it completely.

Reality though, doesn’t always bend to desire, and as evidenced by their petulant reactions after United went ahead, City didn’t like that one bit. Players became more cynical in their challenges and fans made sure ‘Emptyhad’ lived up to its name.

There was no milk thrown at Guardiola during post match celebrations – nor any other beverage for that matter. No calls of ‘no plan-B Pep’ directed at him either. A difference in class, just as Mourinho had said.

City would go on to win the league this season, and other accolades in the seasons to come but when they look over at their neighbors, they’ll always be second best. They still are Manchester United’s noisy neighbours.