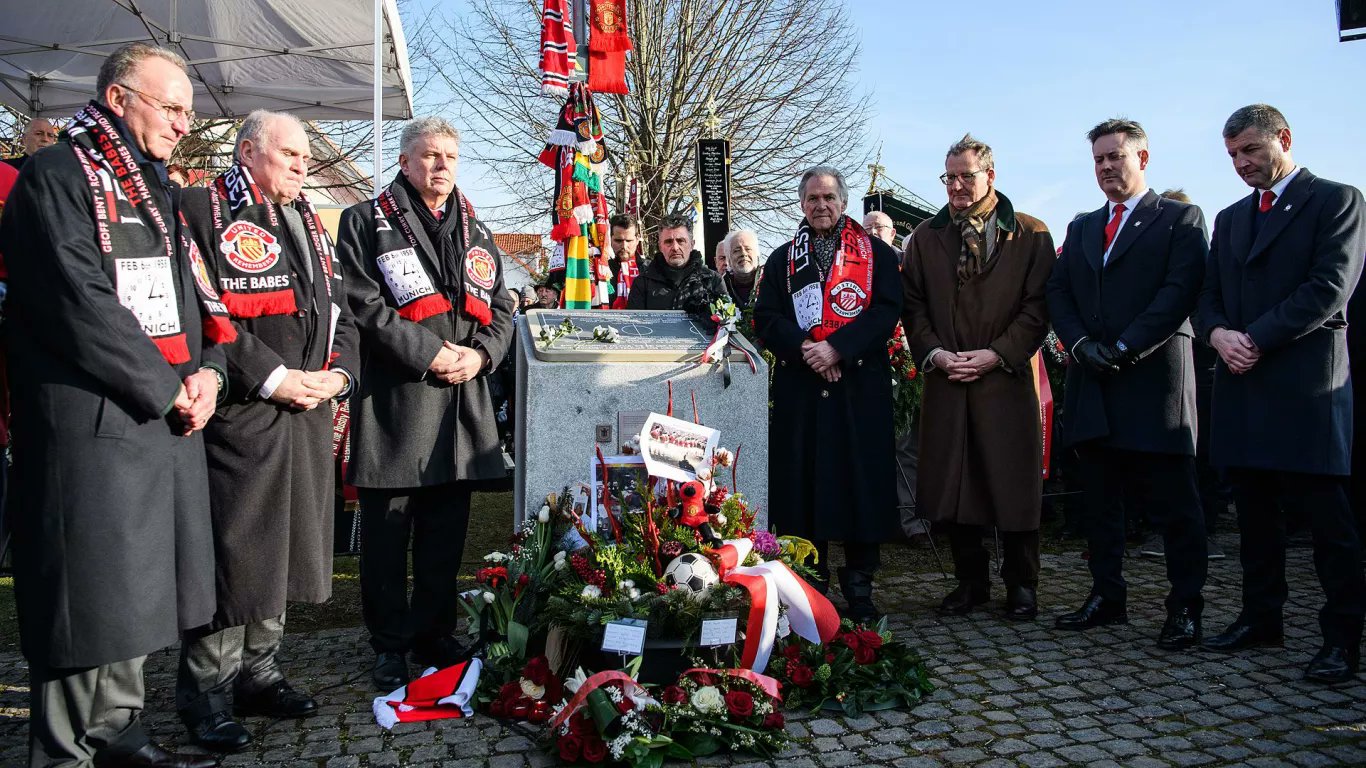 On a bitterly cold February morning, I set off from my home to Dublin Airport, to make the pilgrimage to Germany and to the site where 60-years-ago on that very day, 23 passengers on board the BEA flight 609 perished in the Munich snow. 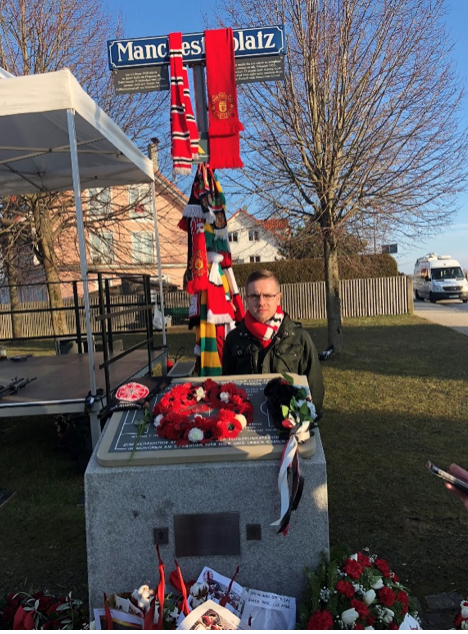 As a 29 year old, I was not lucky enough to have seen the eight United players that died perform live, but I have seen numerous videos and heard stories from older Reds about how this team was the up there with the very best at the time and European success was sure to be just around the corner had the events of that day not cut these young men down in their prime.

After arriving in Munich I checked into my hotel and was soon on the U2 underground from Hauptbahnhof towards Moosfeld, which, is one of two stops, a short walk from the site of the old Munich-Riem airport and now the “Manchesterplatz” memorial.

The service began with the Mayor of Munich, Mr Dieter Reiter, addressing the crowd about how “the victims of the Air Disaster of 1958 are unforgotten in Munich.” The shared grief of the cities,
Munich and Manchester have brought the people very close. He closed his opening speech by saying Munich will honour the commitment that was visible on all flags and scarves “We will never forget you”.

Karl-Heinz Rummenigge then took to the stage and began his speech by saying he was just 2-years-old when the tragedy struck, and he never knew that the events of that day would one day connect him personally with Manchester United. He said United represents unconditional devotion, great joy and deep mourning, he continued by saying that he is impressed by how the memory of the victims is passed on from one generation of Red to the next. This was met with one of many renditions of “We’ll Never Die” by the hundreds, if not thousands of Reds in attendance. Mr Rummenigge continued in his speech talking about the 1968 European Cup final, also mentioning the 1999 Champions League final which prompted the Reds into song again, this time “Who put the ball in the Germans net”. Karl-Heinz continued, that despite this there has been a genuine and deep respect between both clubs that has remained to this present day he also joked United we’re lucky on that May night in Barcelona.

Tony O’Neill was next up on stage to speak on behalf of the fans, he delivered a heartfelt speech about the pain that has been felt by Manchester United ever since that day in ’58, he continued to then speak about the recent air tragedy involving the Brazilian side, where Chapecoense lost 19 of their players, this was followed by a moment’s applause for the victims of LaMia Flight 2933.

But possibly the most poignant part of his speech was when he explained how he met a nurse who was on hand to deal with the injured in the hospital. She was 9 months pregnant, but this did not stop her providing her duty of care to the injured, while on duty she went into labour and had her baby. The woman then returned back to her job and continued to care for the victims. This story shows the commitment of the people of Munich to help in any way they could. Tony concluded his speech at around 10 minutes to 3, which was then met with a special request by Mayor Reiter to have a few minutes of music from the band as well as the fans. Hee, along with Tony led those in attendance in a chorus of “We’ll never die” which, in his words, is his favourite United song.

As the clock ticked up to 15:04, the time of the crash, the crowd fell to an eerie silence as for two minutes everyone in attendance turned their attention to remembering the 21 victims, including our own lost 8 Babes.
To close the ceremony, United fan Tracey Malone took to the stage to deliver a spine chilling rendition of “The Flowers of Manchester” which as we all know, tells the story of that faithful day.
This is a day, that for as long as I will live will be firmly fixed in my mind, As Tony said in his speech, that Manchesterplatz is a place that year after year Reds of all ages will return to that spot to pay tribute to the victims.

On that Munich runway, their lives did grew stiff and cold, but in our hearts and minds their story will never go untold.