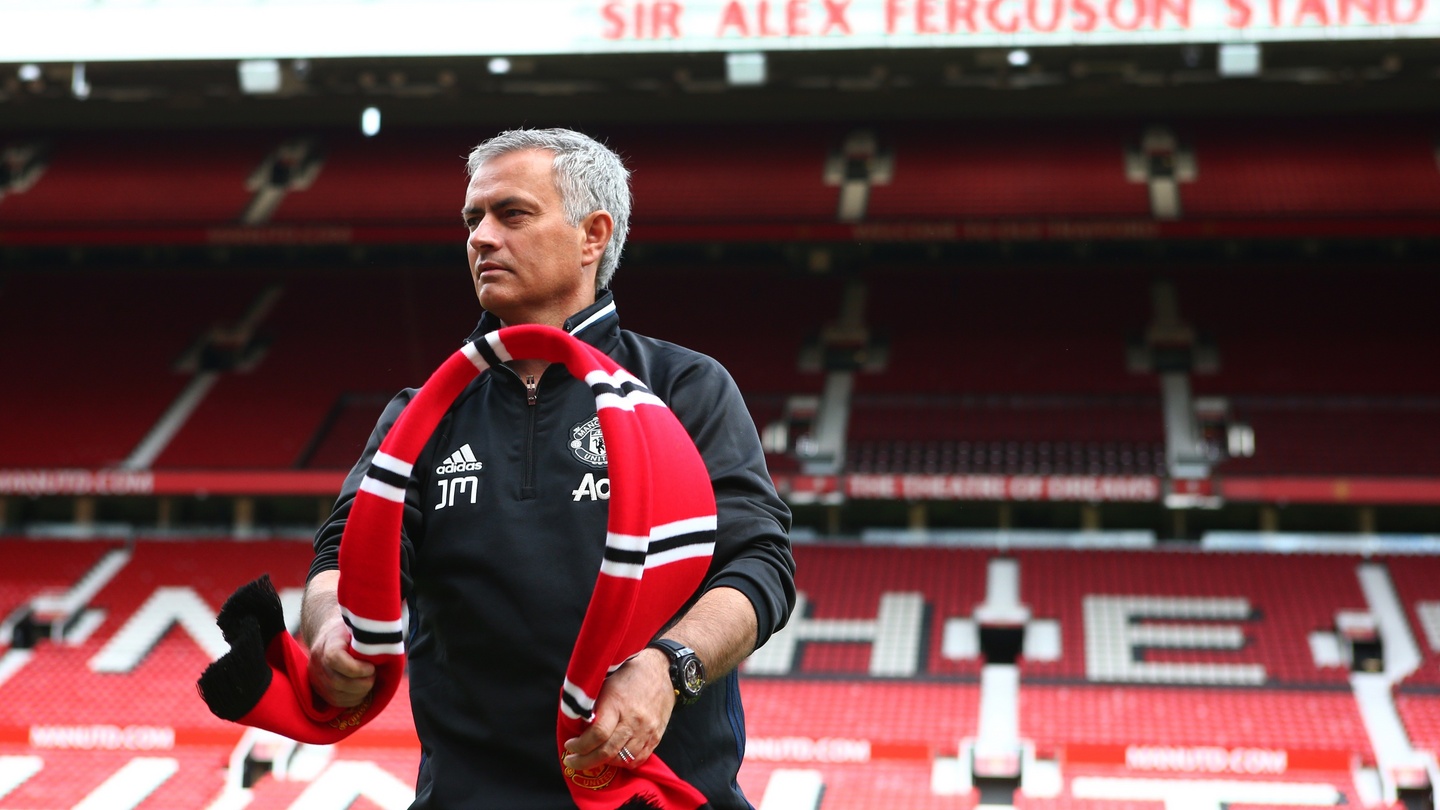 With the wretched David Moyes-experiment long gone and the morbid football of Louis Van Gaal that seemed so exhilarating during the Netherlands’ trashing of Spain at the 2014 World Cup, but by the time the semi-finals took place (versus Argentina in the 0-0 nothing-of-a-game after Germany beat Brazil 7-1) the rigid Van Gaal 3-5-2 system which he later brought with him to United looked impotent and dull, and dare I say anti-Dutch at its very core.

Subduing flair and the will to create; the then sensational Angel di Maria is the prime example of how Van Gaal’s robotism extracted feelings for brains, improvisation for repetition. The two pillars seemingly being; when in possession, take no risks, when out of possession, take no risks. There was never any point in analysing it further was there? Beats me.

The lowest moment of the Van Gaal era was probably in 2015 when United played Aston Villa away and the vanished force that we used to call Wayne Rooney played as a lone striker without being able to do as much as hold on to the ball, never mind control it. If you remember, this was after the tired legs of Falcao and Van Persie were shipped away and young Martial was yet to arrive.

As the Van Gaal era continued to suck the very life out of the club Abu Dhabi announced, “The Guardiola”. This was the man who I imagine any intelligent United fan had wished would succeed the great Sir Alex Ferguson once his inevitable retirement would come. “The Guardiola”, heir to Cruyff’s total-football had coached a Barcelona team that played Fergusons United off the park in both the 2009 and 2011 finals of the UEFA Champions League.

Enter Mourinho. Apparently not good enough in 2013. Now the club’s only hope of a swift return to the very top, having missed out on the top four for the second time in three years. The ridiculous transfer summer of 2016 championed by Paul Pogba in the most expensive transfer to that date, along with a somewhat hero of mine (me being a Swede), Zlatan “on a free from PSG” Ibrahimović, the Vidićesque Eric Bailly from sunny Spain, and Dortmund’s Henrik Mkhitaryan, that was going to do for Mourinho what Ferguson had hoped Kagawa would do for him: put Wayne Rooney on the f***ing bench.

But winter was coming and with it the search for match-winning goals that only Zlatan seemed to possess, a winter which saw United stuck in what used to be Tottenham-land. God only knows what Mourinho thought during the summer of his arrival, not thinking that Wayne Rooney wasn’t well off the pace already and that Daley Blind could perform as a Man United centre-back: a conundrum from the Van Gaal era that Mourinho initially refused to address.

United finished 6th in the league, their worst league campaign of the Premier League era but for David Moyes’s season of perpetual patheticism, yet I am sure many felt a positivity surrounding the club. A feeling United were indeed not yet back, but that they were coming back. Even with the severe injury to the instrumental Zlatan Ibrahimović, the Europa League triumph against Ajax meant United were to compete in the UEFA Champions League again, the lack of which was something Mourinho bemoaned at the start of the 2016/2017 campaign.

Beginning the summer of 2017, the blushing of Chelsea saw Romelu Lukaku join United instead of his apparent preferred destination; poor Romelu having to play for the devils!

This time, surely, United were to be a serious contender for the title. Even more so given the fact that Mourinho’s teams usually peak in his second season. 4-0, 4-0, 2-0- 2-2 and another 4-0 from the first five games seemed to epitomize just that. Lukaku had started were Ibrahimović had ended, Mkhitaryan seemed a new signing and Pogba was again that rare player which seems to have world-class ingrained in them. Jordan Henderson look away.

But with Pogba’s hamstring injury, Eric Bailly’s usual injury absence, Lukaku being too slow in front of goal and Mkhitaryan crawling back into his shell, United were falling behind “The Guardiola’s” shining Abu Dhabi Galácticos. Mourinho’s negative tactics against Liverpool in the middle of October caused a stir in the superficial rabbit-hole that is punditry these days. As if the great Ferguson team of 2007/2008 would go to Anfield and expect to play tippity-tappity football and “not even bother sprinting back”.

City continued to score late goals and win football matches which saw United hopelessly (sense the sarcasm) stuck at 2nd. Thus, began the “if not for José!” stupidity that seems to be the shadow of football or at least the shadow of the Premier League.

And that leaves us with now.

With Alexis Sanchez, one of the beasts of this league, incoming, and apparently a contract extension for the manager himself, along with some far away whispers of Ö-z-i-l, United seems to once again show healthy signs of recovering from the post-Ferguson hangover.

Oh, but for the narrative displayed in the media embodied by the footballing infantile Guillem Balague indeed saying the words that Sanchez choice is between “Pep and money”. 2nd in the league and what United have to offer is money! How about playing in front of 75 000 people at a stadium which isn’t named after a commercial airline? How about being the main man in a Mourinho team destined to challenge for major honours, rather than put on rotation in “The Guardiola” team, favourites to win this year’s Premier League? F***ing hell! This is Man United we are talking about. Not some team who won the League back in 1990. “Petrol and ideas”, beats me! How dare Sanchez choose United over City!

Going back again; I am old enough to clearly remember the Inter team of 2009/2010 beating “The Guardiola’s” Barcelona 3-1 at Giuseppe Meazza in the first leg of two in the semi-finals of the Champions League in a quite entertaining game, whatever that means. The second leg was what the punditry refers to as a “Mourinho masterclass” after some Busquets play-acting saw Thiago Motta receive a second yellow card from holding out his arm too high when trying to keep possession of the ball. The gif is probably on Google as a testament to the holding midfielder’s compassionate Barcelona-ethos. Remember, “The Guardiola” once hailed Busquets as “a fighter”.

After the game which Barcelona won 1-0 but lost on aggregate (2-3) the Catalans turned the sprinklers on, leaving the Inter players to celebrate in the grass-fountain. Mourinho in his Cantona-moment running onto the field, pointing his fingers towards the crowd.

Inter went on to beat Van Gaal’s Bayern in the final. They also won the domestic League and the Coppa Italia. Mourinho, being Mourinho, went off to Real Madrid and Rafa Benitez took over the managerial responsibility. Fat Spanish waiter… Inter claimed the FIFA Club World Cup later that year, yet in 2018 the glory from the Mourinho-years seems ever further away. They haven’t won the league since.

Mourinho’s Real Madrid was fighting against Pep Guardiola in both the semi-finals of the UEFA Champions League and in the domestic league. The games were often chaotic. I’m sure you’ve seen the footage and read the Sir Bobby Charlton quote after one of Mourinho’s infamous antics against the late Tito Vilanova. Even with the sensational brilliance of Messi, Xavi and Iniesta peaking at the same, Barcelona had to surrender the league in 2012, losing 1-2 at Camp Nou after Ronaldo was played open with a slick Özil-pass. Real went seven points clear with four games left to play.

That Mourinho-team broke the record for most goals in a single season, scoring 121 times and collecting over 100 points, beating a record of points set by “The Guardiola’s” Barcelona team of 2009/2010. This was not an “off-season” for Barcelona; Lionel Messi scored an amazing 50 league goals.

In 2011, the year before the victory at Camp Nou which saw Real win the league, after the first leg of the semi-final of the UEFA Champions League Mourinho criticized UEFA in a press conference after Pepe was sent off for a challenge on Dani Alves, after which Messi ran lose twice and Barca won 2-0 away at the Bernabéu. He accused UEFA-officials of being biased towards Barcelona. A friend and I thought he was a poet and that he ought to write a book. He got a 5-match ban. This can stand to symbolize the best and worst with Mourinho. He despises a loss, and he uses defensive tactics to attack the opponent. He applies this both on and off the field. Remember the “Einstein’s of football”? Brilliant.

Later that year Real Madrid beat Barcelona to the Spanish Cup. Ronaldo scoring the only goal. When Mourinho declared that his somewhat messy yet somewhat successful reign was coming to an end he rightfully declared that he had broken Barcelona’s dominance. Yes, football works in cycles (that old cliché) and Real Madrid have since Mourinho’s departure won the Champions League three times. First in 2014, then again in 2016 and again in 2017; but what if not for José? Before Mourinho Real Madrid went six years without getting past the round of 16. During his 3-year stay, they reached the semi-final three times. Peopled talked of “The Guardiola’s” Barcelona as the greatest team of all time. It’s not me putting them down, they played some of the most intricate and exciting football you’ll ever see. Check your YouTube, I recommend the pre-Fabregas era. Even if they weren’t always great away from home in the Champions League and had obvious weaknesses in Victor Valdes and the irrational Gerard Pique, they often appeared unbeatable.

Some of you remember when Mourinho first arrived in England and Chelsea hadn’t won the league in 50 years. His Chelsea team won two straight titles in the mid-2000’s before that boy Ronaldo came of age.

My point is this: while at Real Madrid, during the tumultuous time of the José and Pep rivalry, “The Guardiola” once declared Mourinho “… the chief, the f****ing boss!” in reference to the press room.

So now as Mourinho is about to extend his contract, being 2nd in the league with his most important player injured for almost half of the season, with the Chilean pit-bull that is Alexis Sanchez on the incoming, having won 2 major titles in his first season, “The Guardiola’s” words are the ones that should apply: “He’s the chief, the f***ing boss!”

And may the words extend to the field as well.

2 responses to “Opinion: The necessity of José Mourinho”