The back pages suggest Manchester United will hijack Manchester City’s move for Arsenal talisman Alexis Sanchez, so we’ve decided to take a look at five other incidents which involve football clubs hijacking one another’s attempt to sign a player.

If United do happen to land Sanchez this month under the nose of Pep Guardiola, it will go down as the biggest Premier League to Premier League coop in recent times.

Read what our writers had to say about the Sanchez saga HERE.

If I make spelling or grammar mistakes here, it’s down to being unable to type properly whilst laughing. Chelsea’s gazumping of Manchester United for the signature of John Obi Mikel in 2005 was a strange one. Mikel had already given a press conference in a Manchester United shirt prior to his actual move to Stamford Bridge.

Mikel had begun his career with Norwegian club Lyn Oslo, where he was touted as one of football’s hottest teenage prospects. Just a few days after the player turned 18, United announced that they’d agreed on a deal with Lyn to sign the player, bypassing Mikel’s agents and dealing solely with the player and the club.

But then Chelsea claimed they had struck a deal with Mikel’s agents to sign the player, and suddenly Mikel said he preferred the move to Chelsea after feeling pressure to sign for United.

The icing on the cake came after Lyn lodged an official complaint with FIFA. Mikel had to return to Norway while the situation was resolved, and finally, in 2006 Chelsea got their man after paying compensation to both United and Lyn.

Chelsea were left with egg splattered on their faces back in 2008 when Manchester City hijacked their move for the services of Brazilian winger Robino, who was making a name for himself in Europe after lightening up the Brazilian Serie A with Santos.

Despite being a success at Real Madrid, Robinho got fed up and decided to move on. In hindsight, it is fair to say his career spiralled downwards after he left the Bernabeu, which seems like a no-brainer considering the size of Los Blancos, like United, compared to other clubs.

Robinho, however, was said to have wanted the move to London. Real Madrid then gave him permission to head to Stamford Bridge for contract talks. Chelsea weren’t aware of City’s interest before they swooped in with their initial injection of oil money and signed Robinho for a huge £32.5m.

The funny side to this hijacking story was how nobody had seemed to tell Robin he was going to Manchester and not London. The player told the press he was happy that Real Madrid accepted Chelsea’s offer… He then corrected his mistake — Manchester, not Chelsea — and rumour has it Robinho and his family then thought it was United. There’s another club in Manchester?

September 2008, months after being crowned European Champions for the third time, Manchester United completed the signing of Dimitar Berbatov from Tottenham Hotspur, despite the London club having earlier accepted a shock bid from Manchester City.

City had oil money aplenty and were willing to spend it. A bonus, of course, would be to get one up on their rivals and taking a player like Berbatov from under Alex Ferguson’s nose. But the Scot was adamant that wouldn’t happen. Not on his watch.

The Bulgarian striker was shocked at Ferguson’s personal involvement in his £30.75m transfer to Old Trafford. Berbatov confirmed Fergie met him at Manchester airport on the final day of the transfer window to take him to the training ground.

As the story goes, Spurs had not given United permission to talk to Berbatov at that point and had agreed on a £34m fee with City instead. Still, it wasn’t long before a deal between Spurs and United was triggered.

Paul Gascoigne had been starring for Newcastle United, and after a tremendous 1987/88 season that saw him named in the PFA Team of the Year, he was recognised as the hottest prospect in British football.

Alex Ferguson understandably wanted a bit of that in his team but underestimated how much Spurs wanted ‘Gazza’. Liverpool were another English club said to be interested.

Gazza ended up having a meeting with Fergie and when it was all said and done, the player verbally agreed to move to Old Trafford. The boss, obviously happy with the outcome of this meeting, jetted off on holiday to Malta. The Scot was confident that when he returned, he’d have his man but sadly that was not the case.

Gascoigne received a call from Spurs asking what it would take for him to leave Newcastle and snub Old Trafford for White Hart Lane instead. Spurs obliged after Gazza requested a house for his family, a garage for his father and a sunbed for his sister.

Then Ferguson returned from his holiday to find that Gascoigne had made a £2.2m move to Tottenham.

Roy Keane went back on his word to sign for Kenny Dalglish’s Blackburn team in the summer of 1993 and ended up with Manchester United instead.

Keane had initially decided to sign for Blackburn when he was leaving Nottingham Forest, only to change that decision when an offer to sign for United arrived shortly after his meeting with Rovers boss Dalglish.

There was considerable bad blood between United and Blackburn as a result, but even Dalglish can acknowledge now that Keane was right to choose to join Ferguson at Old Trafford. However, Keane, for his part, regrets how the move played out. 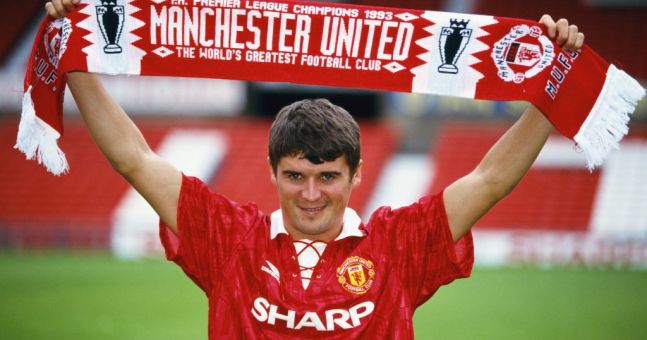