José Mourinho was not hired as Manchester United manager because Louis van Gaal and David Moyes proved unable to recruit suitable players. That was Ed Woodward’s job. By all accounts, Moyes was in for Gareth Bale. Louis van Gaal wanted Thomas Mueller. Maybe those targets were unrealistic or maybe United no longer held the aura for prospective players it did under Sir Alex Ferguson. It’s not critical to the conversation.

Nor was Mourinho brought in because the players for whom the club settled were Marouane Fellaini and Bastian Schweinsteiger. The Portuguese has stood by the Belgian despite heated criticism from all corners and time has proved him right. Fellaini is in fact far more useful than the floor lamp with a frilly shade he resembles. He’s just not more attractive or exciting. Mou initially froze Schweinsteiger out. Yet, to his credit, he has realized the German still has something to offer and welcomed him back.

What’s more, despite crapping out with Memphis Depay and Woodward requiring two rolls of the dice to land the latter, LvG went seven-eleven with Anthony Martial and Ander Herrera. The only recruit other than Memphis from the post-Fergie era whom Mourinho has completely rejected is Morgan Schneiderlin. Whatever you may say about their results, the two bosses between the Special One and Sir Alex left workable material behind. Admittedly, further resources were needed and Mourinho went four for four in choosing Eric Bailly, Henrikh Mkhitaryan, Zlatan Ibrahimović, and Paul Pogba in his first transfer window. The critical reason he was appointed, however, was to restore the winning culture that had gone to ground after Ferguson took up gardening.

In various interviews leading up to the EFL Cup final at Wembley, Mourinho has confirmed as much. Repeatedly, he’s discussed the attitude and approach required to win, stating any advantage in talent his roster might have on paper, the club possessing greater desire on the day, be it United or Southampton, will win.

Under SAF, United was a club which never settled for merely “a lot.” Rather, Fergie’s squads believed they could have the lot. 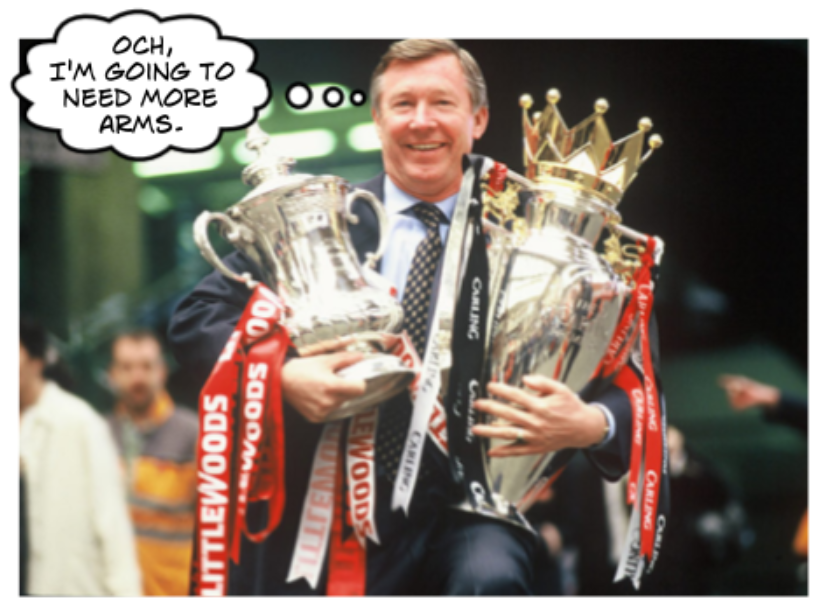 The difficulty in winning doubles and trebles, though, is highlighted by United’s situation heading into the match. Hoisting the trophy will come at a critical price. Finally stringing a few league victories together after a succession of draws, the Red Devils have closed within two points of second place. While they are fortunate both City and Arsenal are idle, in order not to fall further behind Chelsea, Tottenham, and Liverpool, United came into the weekend requiring help from Swansea, Stoke, and Leicester, respectively.

The Swans fought back from an early one-nil deficit to equalize at Stamford Bridge, today, but eventually capitulated. The resultant three points mean the Blues lead United by fifteen points. Barring a seismic collapse, Antonio Conte’s group are almost assuredly beyond reach.

Before United kick off on Sunday, Mark Hughes’ Potters will have a go at Spurs at White Hart Lane. If Mauricio Pochettino’s side win, that will be another club no longer within one result. Then, whether in a celebratory mood or a sulk, Mourinho’s squad will learn whether Leicester’s caretaker manager, having had just three days to prepare since Claudio Ranieri’s sacking, can outfox Jürgen Klopp to keep Liverpool within striking distance. Regardless the outcome, United will need to redouble their focus on the Premier League immediately after the final. That was the way of it for Ferguson’s United when juggling four competitions. Mourinho wouldn’t have it otherwise for his.

Such an attitude doesn’t marginalize the League Cup as a competition. It was Mou’s maiden trophy when he first came to England. The victory heralded a change in the Premier League’s natural order. Philosopher George Santayana once said, “Those who don’t remember their past are doomed to repeat it.” Yet, memory is also critical when you do want to repeat history. Mourinho vividly recalls his first League Cup, treasures the memory, and greatly desires to win again with United in hopes it will lead to further success at Old Trafford, as his original triumph did at Stamford Bridge.

So, yes, Henrikh Mkhitaryan won’t be available. Michael Carrick is, although his and Wayne Rooney’s fitness will have to be closely monitored. Meanwhile, Claude Puel has had fifteen days between matches to prepare his Saints, whereas Mourinho has had three with United. Although he isn’t my favorite manager by several miles, I agree with Mourinho’s perspective on this match. Who plays is irrelevant. Talent has no bearing. Nor do either boss’ tactics. Winning the first meaningful trophy in the Mourinho era will rely wholly on his players’ desire to win. Failing will be a crushing blow that will bring down the circling vultures. Victory, however, will merely be the first tiny step in a long journey towards redemption for both club and manager. What do you say we go for a walk?