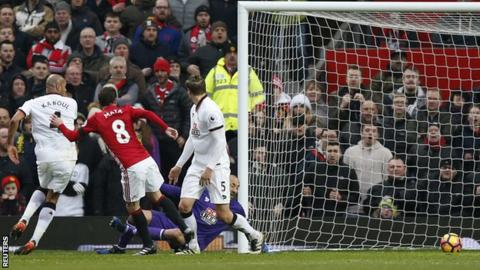 Like any other match day under José Mourinho, Manchester United’s attack plan was two trailer park girls going round the outside. Against Watford, it was Henrikh Mkhitaryan, playing centrally as the number ten but trying to flank Younes Kaboul and Sebastian Prödl to Zlatan Ibrahomović’s right. Anthony Martial provided the speedy threat on the left. Ibra himself was having an off day, every chance attempted going horribly wide or over except for a header Heurelho Gomes snagged with a diving save and a tame dribbler the Brazilian disaster-waiting-to-happen  happily collected. So, after setting up all three with gilded chances that went awry, not to mention Paul Pogba and Ander Herrera as well, the diminutive Spaniard known as Johnny Kills decided it was time to step up and be the real Slim Shady.

With United’s unconverted scoring chances approaching double digits quicker than the half-time whistle and his multiple set-ups all having come to naught, Juan Mata saw Anthony Martial make another patented end-line run, easily outracing the Hornets’ Daley Blind clone, right back Craig Cathcart. He also noticed Zlatan cutting to the near post. Rightly thinking “this looks like a job for me,” he made a supporting run behind. Prödl went with him, but Mata hit the brakes three yards from goal, using the center half’s inertia to create space. When Martial’s low squared cross fizzed past Ibra’s mistimed back heel flick, the Spaniard guided it into goal with a flourish a Dorchester doorman couldn’t match. Then he ruined the metaphor by losing his shoe as he ran to the corner flag to celebrate.

Despite running their first half attempts to fourteen, United couldn’t force another past Gomes. Nor did the Watford goalkeeper appear to be at his frequently charitable worst. Walter Mazzarra made half-time adjustments, bringing on Daryl Janmaat to play down the left wing. The Dutchman is normally a right back but the change-up apparently confused United sufficiently to slow down their assault in the second forty-five.

Either that, or United were content to sit on their slim lead and (hopefully) hit again through the counter. The shady tactic has backfired more than once for Mourinho’s side. Fellaini’s penalty gaffe at Goodison Park and Giroud’s header when Arsenal visited Old Trafford immediately spring to mind. This time, they got away with it, however. Eric Bailly, freshly returned from a disappointing Ivorian performance in the African Cup of Nations, helped immensely. He disrupted movement after Hornet’s movement with enthusiasm, getting under Mauro Zarate’s skin more than once. Several times, he then romped up the pitch in possession as though he were Paul Pogba.

After Watford credibly imitated cheesy Hollywood western Indians surrounding David de Gea’s wagon train for the first quarter-hour after intermission, Ander Herrera broke up a raid before it could begin, quickly releasing the real Pogba. He found Ibra, who couldn’t score on the day to save anyone’s life but held up the ball remarkably. The Swede flicked on to Martial. The young French man played Dr Dre to Mata’s Marshall Mathers, completing the goal scoring tandem who put an end to any hopes for Watford. Again cutting in from the left, he hesitated in the same manner Mata had on the first strike. Like Prödl before him, Kaboul kept going a step or two, halting just in time to impede Gomes’ view. Ibrahimović arrived, Zlatan and his shadow, top-knot wannabe   Prödl, adding to the obstruction, allowing Martial to slot the ball inside the near post before the ‘keeper realized he’d been done and dusted.

United then rode out the match from with little else to bother them except for a pair of inadvertent elbows delivered to Henrikh Mkhitaryan. Stretty News own Rowlesy may have jinxed him  . The first connected squarely with his nose but, as it’s a formidable proboscis, did no damage. The second caught him in the mouth, drawing blood. Robert Madley arrived, bent over the supine Armenian, who might have said, “My name is, my name is, my name is tikka tikka…” causing the official to remark it just wasn’t his day then summon the trainer onto the pitch. Soon after, Mkhi exited for Jesse Lingard holding kerchief to mouth.

While the positive result still leaves the Red Devils in sixth place despite extending their Premier League unbeaten run to sixteen matches (they were in eighth when it began), United do sit a mere two points out of second place thanks to Liverpool’s 2-0 victory over Spurs at Anfield. Failure to exploit their rivals’ dropped points earlier in the new year have almost certainly seen Chelsea escape United’s reach, eleven points up, a game in hand with Burnley their Sunday opponent, and just thirteen rounds remaining. Nevertheless, finishing as runners-up, if Mourinho can manage it, holds great promise for 2017-18.