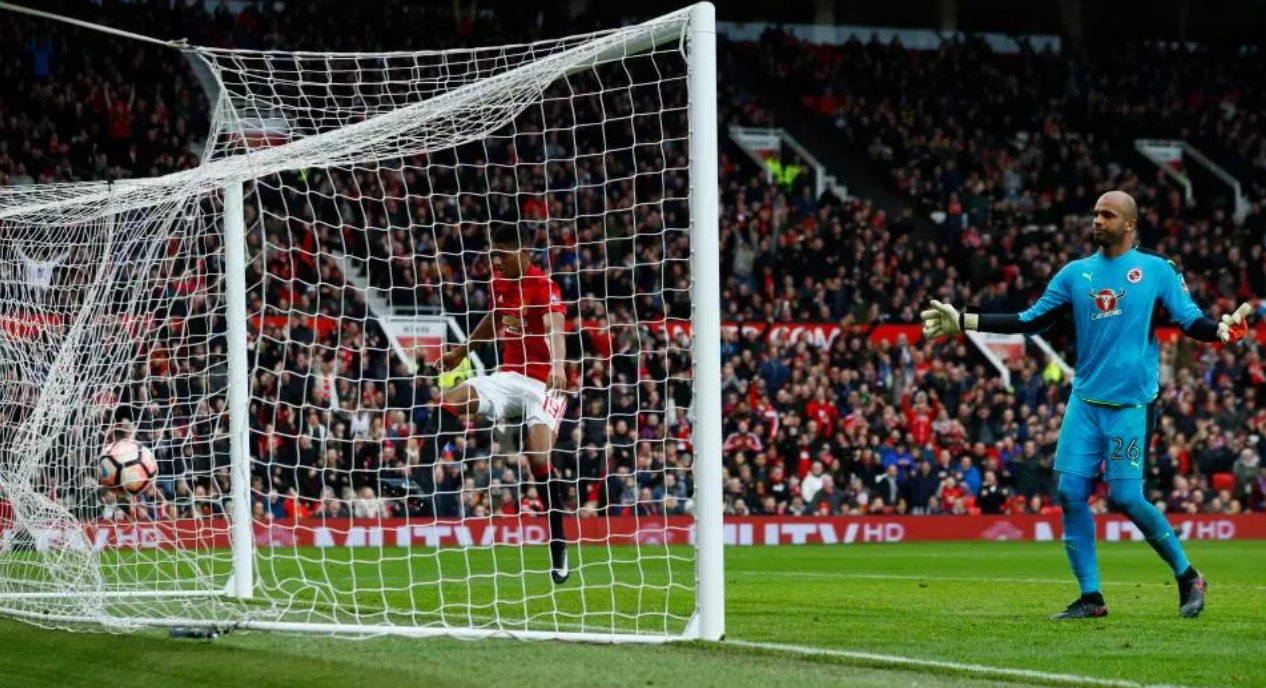 There was no mystery to the FA Cup Third Round encounter between Manchester United and Reading. The gunplay was completely one-sided as well, rendering the outcome all but certain within the first quarter-hour. After Anthony Martial saw his first attempt saved, he came right back, driving into the box, laying off for Mata, who chipped one for Wayne Rooney to knee home for his two hundred forty-ninth for the club. Soon after, Martial made another run, Royals defenders acting more like escorts than impediments. Untouched even as he penetrated the eighteen-yard box, the Frenchman easily slotted United’s second past a helpless keeper. On Friday, Ali Al-Habsi had signed a new contract with Reading FC. On Saturday, he picked those two balls from his goal, then two more in the second half, including one he gifted to Marcus Rashford. Timing, I suppose, is everything.

Sir Bobby Charlton certainly thought it was past time for Rooney’s goal which at last equaled his all-time record for the club. Pictured in the stands, the United legend’s face bore the pleasant surprise of a patient sitting in the doctor’s waiting room, every magazine read, finally called after giving up all hope he would be seen. One more goal, then perhaps both men can get on with their lives.

Meanwhile, Al-Habsi’s afternoon wasn’t a complete disaster. He made several outstanding saves, stopping Marouane Fellaini once, Wayne Rooney and Rashford twice, all from point-blank range, and diving to his left to parry away a nasty, dipping curler from Michael Carrick that bounced just in front of him. For awhile, he looked more like David de Gea than Heurelho Gomes. He wasn’t entirely to blame for Rashford’s second goal, either. Liam Moore played the ball back to him from just a few yards distance with Rashford between them. Rushed, he accidentally nudged the ball with his standing foot, then whiffed in trying to keep it from the United teenager. Moore, though, could have simply turned toward the touch-line, taking his time to pick out a pass or clear, rather than sending the ball into danger.

On the sideline, a stoic, gum-chewing Jaap Stam motioned for his side to get on with it, a fourth goal conceded little different from three with just over ten minutes remaining. The goal was the type Pep Guardiola claims are the cost of doing business when involving your goalkeeper in a possession game. Claudio Bravo probably knows a support group Al-Habsi may wish to join (probably mediated by Gomes).

Still, as every United fan on thirty’s downhill side knows, Stam was one of the best defenders the game has seen. He has cultivated a Pep-like possession style at Reading, guiding the club to third in the Championship, in the frame for a possible return to the Prem. Yet, the hallmark of Guardiola teams, especially Barcelona in tiki-taka’s heyday, was the relentless, pressing pursuit to win back possession when it was lost. In the match’s early stages, Stam’s Royals didn’t attempt so much as one tackle, preferring to stand, watching United make brilliant one-two combinations, rather than hunting in packs any Red shirt on the ball. Even more than supporters in Old Trafford’s front row, the Reading XI paid dearly for a close-up view of United’s talent. Passivity surely wasn’t what the Dutchman had in mind from his players when they took the pitch. He had shrugged off all talk regarding a potential welcome back to Old Trafford, claiming he had no interest in hearing fans sing his name, only in achieving a result. In departing, one could only expect the one-time United legend to be in the mood for a dirge.

Midway through the first half, the visitors began to get their act together. Moore missed a golden opportunity to flick in a pass from dead center in the six-yard box. Like Al-Habsi would with Rashford bearing down, the defender whiffed, allowing the ball to dribble harmlessly beyond the far post. It would be the Royals’ only clear chance in the match.

Daley Blind’s pace came into question again in the second half. Gareth McCleary would beat him cleanly to the touch-line on one possession, only for his cross to be intercepted by Fellaini. Blind was also forced into a professional foul on Danny Williams in the late-going, to prevent the German-born American international from getting into the box and perhaps testing Sergio Romero. For the most part, the Argentine could have read an Easy Rawlins story, or two, he had so little to do at the back.

Daley has good vision, can pick out a pass, show up for a timely goal, and is blessed with sublime positioning sense. But, he is too often exposed on the flank, where he cannot rely as heavily on a partner’s help to deal with an incursion. While Mourinho values the young Dutchman’s attributes, he prefers size and strength in the middle, where Blind is better suited to play. At left back, he has been placed in a position to fail, rather than succeed. Deputizing Michael Carrick and Ander Herrera as a holding midfielder might be a better role.

With Marcos Rojo having gone off with an as-yet undetermined leg injury, Blind will likely be asked to provide Phil Jones and Chris Smalling temporary cover until Eric Bailly returns from the African Cup of Nations or the club acquires another center back in the transfer window. Victor Lindelof’s name has–been–bandied–about frequently, although Mourinho claims to be happy with his squad and has called BS on all the fish wrappings who say otherwise. Although, with his side still involved in four competitions, added depth would surely be welcome.

Even if United hold to their sell-first policy and are unable to move Morgan Schneiderlin or Memphis Depay quickly, there are creative solutions within the current roster. Michael Carrick has experience. Timothy Fosu-Mensah is also a possibility. He’s featured almost exclusively at right back for United, but was a center back with Ajax. At 6′ 3″, he has the height Mourinho seeks but, still just nineteen, has yet to fill out, weighing a mere 150 lbs. Cameron Borthwick-Jackson has some forty more pounds of meat on his bones. If Rojo is out for an extended time and the transfer market proves too difficult, the missing half of the Hyphen Twins could be recalled from his loan to Wolves. Finally, of course, there’s Blind.

José Mourinho turned over almost the entire squad from Monday’s win over West Ham. Somehow, both players he left in took heavy knocks. United apparently have a bit of ‘unlucky‘ still in the bag. Rojo managed to come up lame. Carrick, himself, took a gash above his left ear when contesting a headed ball with fellow thirty-five-year-old, Yann Kermorgant, a collision seventy years in the making. After being cleaned up, then having half a jar’s worth of petroleum jelly applied, the veteran returned, quickly testing Al-Habsi, later putting Rashford through for his first with a perfect ball from the United half. With that action, he was replaced by Bastian Schweinsteiger, the German grinning like a five-year-old on Christmas morning at the opportunity for a bit of mop-up duty.

Rojo and Carrick’s wounds amounted to United’s only misfortune on the day. Thus, it’s hardly the apocalypse, nor something supporters haven’t seen to a much greater degree in Januaries past. Center backs falling like flies never seemed to slow down Sir Alex Ferguson, and, with eight victories on the trot , it doesn’t appear to be hindering Mourinho’s United. Next up, Hull City in the EFL Cup Semi Final’s first leg.