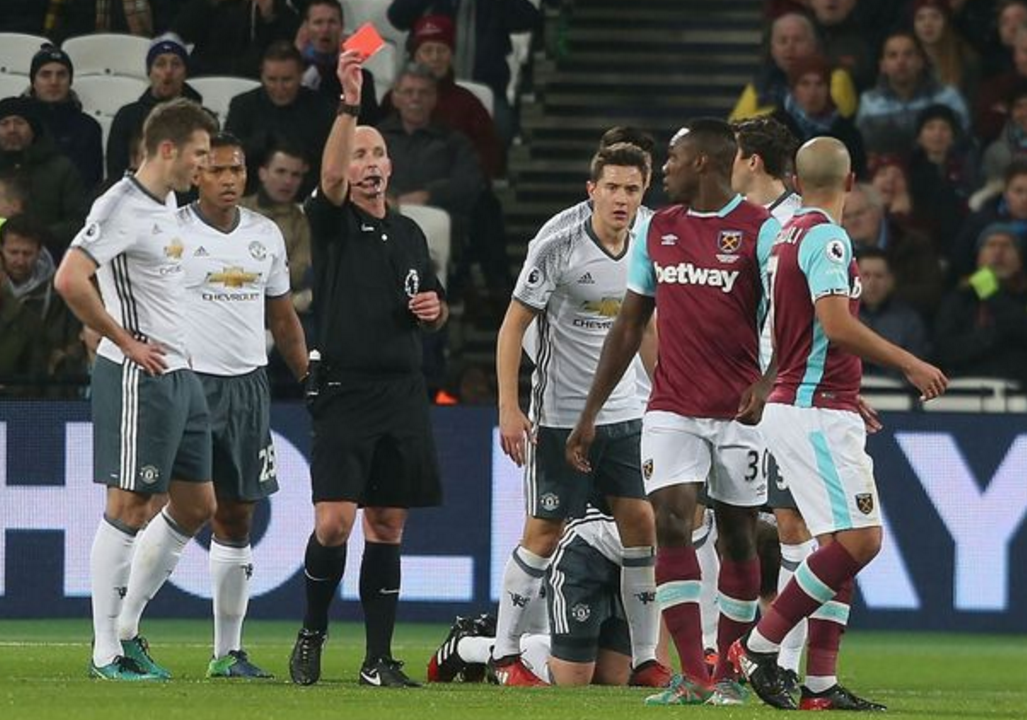 Manchester United managed to snatch three points from Middlesbrough on New Year’s Eve Day when it seemed the entire world was against them. Apparently, José Mourinho’s squad had decided they could no longer accept being the “unluckiest” among the Premier League’s unlucky, as the Portuguese had lamented back in November, instead fighting through their misfortune to piece together a five-match win streak. Lady Luck, though, is an even more fickle mistress than Taylor Swift, Jennifer Aniston, and Elizabeth Taylor combined. So, two days after the Boro win, she decided to be seen on United’s arm at the Queen Elizabeth Olympic Park against West Ham. Whether it was down to fatigue from the fast, furious holiday fixture list or some overconfident, misguided notion things could only get easier, the eleven who took the pitch for Mourinho needed her help to stretch their winning streak to six.

My first image of the match, upon finding a decent stream, was Mou kneeling in the technical area next to a water bottle six-pack. Naturally, then, my first thought was, “Uh-oh, here we go.” The league’s high-water mark for accumulated yellow cards had been bumped up from five to ten when the World Clock ticked over from 2016 to 2017 but I wasn’t sure the United boss knew the amnesty didn’t extend to managers being banished to the stands. His next action indicated he did, as he placed his notebook on the ground next to the bottles, squarely in the path of any reckless volleys on-pitch developments may tempt him to launch, the perfect makeshift nicotine patch for his notorious short fuse. I sighed in relief.

Fifteen minutes in at the Liz (as I think it should be called), though, I was crediting his foresight. The match was shaping up to be a frustrating one with the Hammers looking the more interested side. United’s early probing was being interrupted before they could get near the West Ham eighteen-yard box. Calling their tempo listless and their passing predictable was charitable. Worse, the home side was repeatedly finding inroads into United’s final third on the counter.

Then Sofiane Feghouli put a heavy touch on a ball, tried, and failed to outlunge Phil Jones for it. The ball was a fifty-fifty challenge between two players for whom restraint was as likely as a clean Russian athlete. Both came in hard, Jones arrived first, then rolled around shouting “Oh, Feghouli!” when the Algerian national’s legs scissored through his own. Mike Dean looked at the hastily departing Hammer, then the wildly thrashing Jones, heard Lady luck remarking she’d misplaced her rouge, and, ever chivalrous, produced a red card.

A yellow would have been justified. A stern talking-to, with the foul occurring so early in the match, might have left United supporters aggrieved but would have been understandable. Dean, however, has a penchant for clamping down on matches early. Still, handing them to one team or the other like a belated Christmas gift is overdoing it a bit. It wouldn’t have shocked me to see a sympathetic Mourinho politely tee up a water bottle in Slaven Bilić’s technical area.

For their part, United’s outfield players seemed as unimpressed with Dean’s gift as a ten-year-old finding the box he had hoped was a new PlayStation to in fact be underwear and socks. Their listless play continued. At Mourinho’s urging they did make one incursion into the six-yard box. Antonio Valencia deflected a squared ball within arm’s reach for Darren Randolph. The West Ham keeper stunningly kept it out, then gathered in the rebound after it caromed off his left post. Seemingly, Lady Luck had decided United were a dull date, so had opted to go on a pub crawl.

West Ham then forced a save from David de Gea before the break, and another when Mikhail Antonio was sent in all alone on the hour mark, firing early, but right at the Spaniard. Mourinho, who had already sent Juan Mata on for Matteo Darmian at the interval, decided it was time for Rashford action, introducing the nineteen-year-old for Jesse Lingard.

In the first half, United’s tactics had been faulty in two aspects. Michael Carrick had been hanging too far back against an undermanned opponent. Mata’s arrival, however, saw him assigned to partner Jones at center half. Marcos Rojo slid out to Darmian’s left back position. Although Carrick has played at the back before, the unfamiliarity between him and Jones likely afforded Antonio too much space through the middle for his run. Had he converted, United would have only had the right to call themselves foolish, not unlucky.

The second issue was playing too narrowly against ten men, rather than forcing them to cover more space than their numbers could manage. Lingard was hugging the touchline on the right but Henrikh Mkhitaryan was venturing inside all too frequently, much to the Hammer’s benefit. The Armenian’s greater capacity for magical moments–can you say scorpion kick?–probably motivated the boss to leave him on at Lingard’s expense. When he did come off for Rashford, though, Mkhi checked himself on the way to the bench to accept a brief rebuke.

Rashford, meanwhile, made an immediate impact. Staying wide on the left side, he made a series of runs that had a tiring Håvard Nordviet considering a career change. Three minutes after taking the pitch, a cutback pass for Juan Mata, who redirected the ball past Randolph, broke the deadlock.

Another cutback, this time for Pogba, led to a volley curling just beyond the far post.

Fifteen minutes after the goal, Lady Luck returned from her pub crawl to give United a second chance. Ander Herrera, who had earlier emerged from an inadvertent clash of heads requiring three stitches to his right eye, won a loose ball at the top of the eighteen, immediately knocking it through to Zlatan Ibrahimović. The Swede turned and shot, despite knowing he was offside. The linesman did not. The ball flew between Randolph and his right post. United led 2-0.

The score remained so until the final whistle. Afterwards, Slaven Bilić labeled both the red card and Ibra’s goal as “totally, totally, totally unfair” to the Hammers. He will be fined by the FA. He may even face a ban. Yet, other than the understandably biased notion Jones’ lunge was the more dangerous, he is right. His side were the unlucky ones on the day. In response to his pain, Lady Luck just laughed. Then she asked United to walk her to her door. Upon arrival, she gave the club a light peck on the cheek, whispering huskily in its ear before pulling away, “Don’t call me, I’ll call you.”