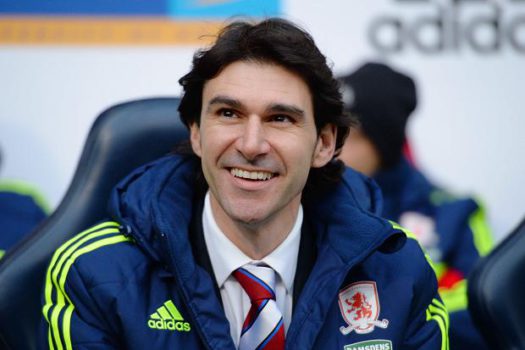 Current Middlesbrough head coach made his name as assistant under Jóse Mourinho at Real Madrid and the bond remains strong.  Can this help thaw the frostiness between the clubs from previous encounters?  By Philip Morrissey

Much has changed since Utd’s last encounter in the premier league against the Teesiders.  A two nil victory on that occasion, was crucial in two ways.  It helped steady the ship, after a damaging wobble, towards the record equaling 18th league title for the away side.  It was, perhaps, more important for the home team.  A poor run of results in 2009, had pushed them down towards the relegation area.  An unbeaten record at the Riverside had allowed them to keep in touch with those around them.  Wins were now of a precious nature.  With all their rivals struggling to put form together, a series of victories could allow them to secure their place yet again.

Considering the team selected, it could have given Boro a substantial lift.  As it had fallen in between the two-legged champions league encounter against Arsenal, the line-up was much changed.  If they had any opportunity of securing a precious three points, then this was it.  The boost given to them did not materialise however.  Jermaine Aliadiere squandered an early chance but that was about all they could muster.  Recent P.F.A player of the year, Ryan Giggs sent them on their way, and Ji-Sung Park added the second to seal the game.  United were now on the brink of another title, whereas the foggies were pushed further towards the drop zone from where they failed to escape. 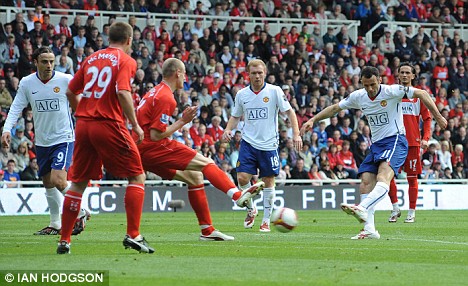 At the time, they were seen as no great loss.  Games against them were dour, scrappy events.  The glamour days of stars such as Mark Viduka, Alan Boksic, Juninho and Gaizka Mendieta were gone.  It was all about pragmatism.  Players such as Robert Huth, Emanuel Pogatetz, and Julio Arca embodied their game plan.  Keep on fouling as long as you can get away with it.  A penalty won by Ronaldo during a cup tie resulted in much hand wringing and wailing in the papers from them.  The surprise was that it had only been one of several incidents that could have been blown for.  Then boss, Gareth Southgate, was seen as being a manager being awarded the job without particularly earning it.  Steve Gibson had circumnavigated the FA’s requirements of coaches badges by arguing it had been due to him being an international player and not having the time.  A flimsy excuse but amazingly it worked.  He would later use being in the right place at the right time to land the England job.

The differences in fortunes and personnel have been vast in the meantime.  Whilst we have gone on to move on to twenty titles, reach two champions league finals, a league cup triumph and numerous charity shields, they have languished in the championship.  Southgate, Gordon Strachan and Tony Mowbray were all unable to achieve the goal of promotion or even reaching the play-offs.  That certainly puts our testing period under Moyes and Van Gaal into perspective.  That at least lead to a forth place finish and wembley joys. 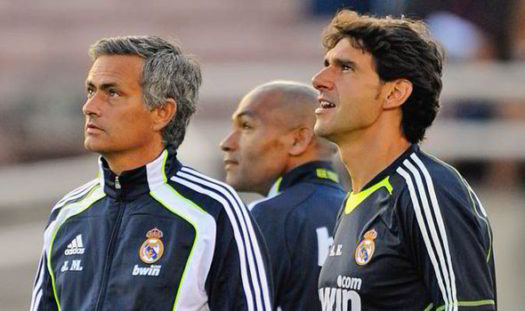 It came as somewhat of a surprise when Aitor Karanka landed the job.  They were seen as a club going nowhere particularly fast in the second tier of English football.  He had recently been the assistant manger with Real Madrid.  Not the most natural of matches.  A poor start had seen them stuck in the bottom-half of the table.  If he had a magic wand, it did not work straight away.  They continued to underwhelm for the remainder of the season, finishing around mid-table.  It was a complete turn around the following year.  He built the team around a solid base and the goals of loanee, Patrick Bamford and recent signing from Real Munica, Kike, shot them up the table.  They were difficult to play against on the road and devastating on their own patch.  This was brought to show in the two legs against Brentford in the play-offs.  Unfortunately, a slow start in the final resulted in Norwich claiming the honors.

This ensured that the pressure was on in the following season.  Promotion was the ambition and Gibson certainly enhanced this by heavy investment in the side.  To the chagrin of other rivals, the likes of Jordan Rhodes, David Nugent, Stuart Downing and Cristhian Stuani arrived at the club.  Despite that, it was neck and neck all the way.  At various stages, different clubs assumed control, only to be hauled back and overtaken.  At one point, he threatened to step down due to perceived lack of support.  This was overcome and the bid continued.  Ultimately, Burnley won the title but a showdown at the south coast would decide on who would join them.  Brighton held the advantage being at home but Middlesbrough knew a draw was enough due to superior goal difference.  In a tense encounter, they got the result required and the party could begin in earnest. 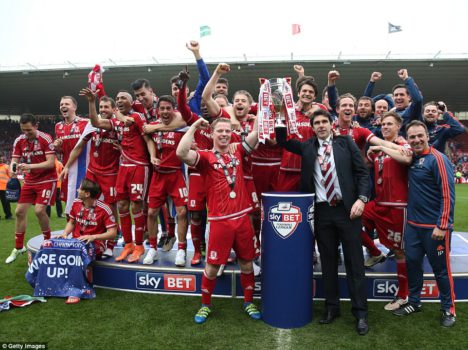 The friendship of both managers has been talked up in the press conferences prior to the game.  As his former assistant, Karanka claimed that he was looking forward to both league encounters.  Both have stated their desire to share a drink afterwards.  As with 2009, both teams need the points for different reasons.  Despite working with Jose, the Boro manager has been compared to Van Gaal in terms of his slow possession based system.  They are currently clear of the relegation area but goal scoring has been a concern for them all season.  Following the result tonight, even Hull have netted more in the league.  Former Blue, Alvaro Negrado, has been their fulcrum.  The goal rush he delivered in his first spell in the premier league has not been replicated so far though, and he is in desperate need of support from others in the team.

The prior relationship between the two men cannot overshadow the importance of this game.  Whilst the visitors are not suddenly going to go open and free-flowing, we can only wish that it does not produce some of the uglier moments of previous games.  Allegiances may be cast aside for ninety plus minutes in order to secure the precious win but hopefully the friendship from the past will remain.