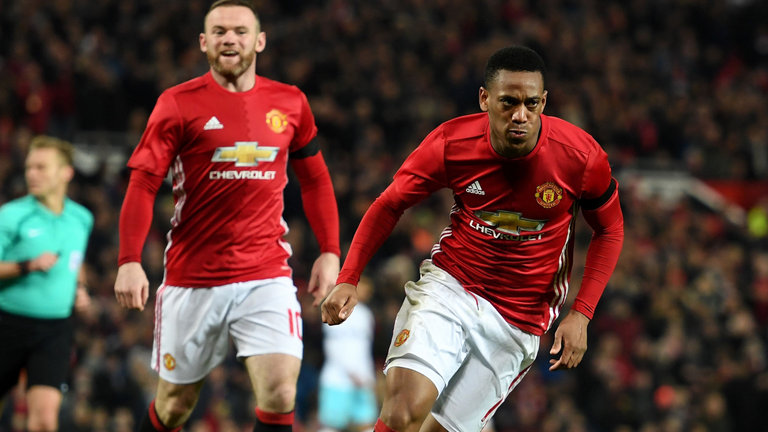 It remains to be seen whether José Mourinho’s Donald Trump-like approach to football management will continue to be successful at United but it was thrilling to watch his team launch relentless waves of attack and score a bagful of goals into the bargain. The boss’ assessment of last night’s League Cup/EFL Trophy/Coca-Cola Cup/Worthington Cup/Sherbert dib-dab Cup tie being the same as Sunday’s dress rehearsal but “with more goals” is very simplistic. United were far more cutting and incisive with their attacking last night than on Sunday, moving the ball with far greater pace and intelligence in key areas, thereby creating multiple clear openings. Still, at one point it looked like déjà vu all over again when Ashley Fletcher equalised for West Ham after United wasted 33,967 chances. In the end, thankfully, United looked a little like the team from the mid-nineties. Attacking with the pace, power and intelligence of glorious days gone by, United handed out a thrashing and, as always, received the result they deserved. Just as it wasn’t bad luck to draw four successive league home games, it wasn’t good fortune to run out easy winners. United were excellent and were richly rewarded.

The Ballad of Wayne Rooney

Wayne Rooney is right to be furious although he should really only be angry with himself. A superb display from the United captain was unfortunately overshadowed by a stupid booking for dissent. If anything, he was lucky. Repeatedly firing the f-word at a referee could and should easily be a red card offence but Rooney has been behaving like that for so long it seems to just be accepted. Nevertheless, a 31-year-old father of three should know better. As a result, he now misses a chance to break Bobby Charlton’s scoring record at Goodison Park. I will finish on the positive though. Rooney performed excellent again as an advanced midfielder, just as he did against Swansea and Feyenoord. It appears, with his standing as an untouchable now stripped from him, Rooney’s motivation has returned. He’ll never be world-class again but then he never was. As long as Rooney is very good, that should be good enough for all of us.

Magic Mhki has earned his place

So apparently last season’s Player of the Year in the Bundesliga is pretty damn good. Who knew, eh? Henrikh Mhkitaryan once again made a mockery of his manager’s insistence that he wasn’t ready to start for Manchester United, producing a man of the match display that narrowly eclipsed Rooney and Anthony Martial for the honour. As he was last week, the Armenian was everything we hoped for when he was introduced in the summer. Gliding around the field into spaces you didn’t think existed, linking up with his fellow attackers superbly, knitting everything together, and even making young sulky chops Martial look moderately happy for a change. The Armenian’s back heel assist for Zlatan Ibrahimovic’s first goal was delicious and decadent. Not only did he mock any notion he isn’t ready but mercilessly derided the even more ludicrous notion vastly inferior cart horses Ashley Young and Jesse Lingard are better. Time to stop taking the Mhki, José, and play the man regularly!