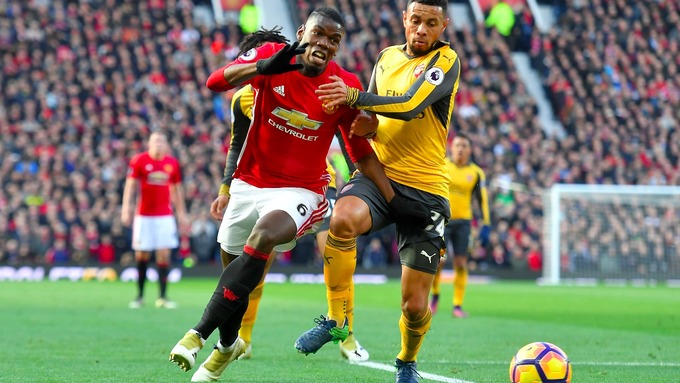 Going into this early kick-off, all the the conversation was whether Wegner could possibly overcome a side managed by Jose Mouriniho.  Arsenal have not had managed to win at Old Trafford since 2006 but yet were fancied to succeed again.  Both sides are going into a week in which they are playing important European games.  The gunners reacquaint friendlies with P.S.G, whilst United welcome Feyenoord.  Here are my talking points from the game.

Weakness in the air

It may have been the Londoner’s only attempt on target but ultimately it was the one which saw the home team frustrated yet again.  Considering it was a game which should have been long wrapped up at that stage, it was another two points dropped at home.  It is true that Marcus Rashford should have blocked the cross that led to the 89th minute equaliser.  What is equally to say is that it was equally as preventable when it came in.  The combination of Phil Jones and Marcus Rojo had done well up until that point but were caught badly at that stage.  Particularly Jones who was left on the ground when the ball came in.  Earlier on in the game saw a cross which should have been converted by Sanchez.  His header went laughably wide of the post in what seemed a tired display by the Chilean.  This should really have provided a wake up call to the central defenders of Manchester United, was one that was unheeded.  It remains the question as to how long Bailly is going to be absent for and how much Mouriniho trusts Chris Smalling.  Certainly you would have expected either man to head clear

Is there anyone that doesn’t love Juan Mata and Ander Herrera at this stage?  The duo have been friends for quite some time and became international colleagues during the week against England.  Much an achievement may have been overlooked in the aftermath of the home sides last minutes surrender.  The Basque native has been rejected for a Spanish cap due to their embarrassment of riches in that area in recent years.  His call up to recent squads has been due to his own recent form.  This has been helped to his Galician team-mate.  Yet again, the two were on form.  Herrera was quick to receive a throw in from Pogba and delivered a splendid cut back to the on rushing number ten.  Even taking away their linkup for the opener, both players were busy throughout.  Herrera’s combination with Carrick provided the structure to build upon, whilst Mata delivered the business up front.  There is a feeling that both players have cemented their place on the starting eleven and this can only have accentuated this.

With the suspension of Ibrahimovich, and the dropping of Wayne Rooney, it fell to Marcus Rashford to lead the line of attack.  This has been the call that many fans have been making for quite some time.  Would it not be better to combat defenders with a degree of pace which they are afraid of?  Unfortunately, in this case it did not really work out for the young attacker.  The contrast between today, and his last appearance the gunners, was staggering.  That does not mean that such an experiment should be neglected in the future.  He may not have delivered as many goals this season as we expected but that mainly up to game time.  With both forwards in front of him being in their mid to late thirties, his development is ahead of schedule.  Because of what he has done already, it is easy to get carried away.  He provides the amount of pace and ex-factor that the established forwards maybe do not.  Especially going forward into the future.