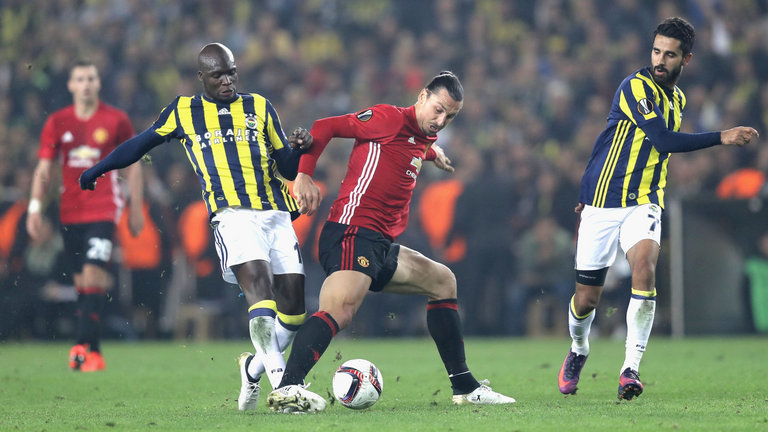 United’s previous ventures to Turkey have been notorious for hostility and having to cope with a cauldron of toxic noise. Galatasaray’s famous Welcome to Hell banner still lives long in the memory to the current day. United knew full well the situation they would face on Thursday night.

As it transpired, United’s abject performance was symptomatic of their recent European woes. It was another dire display to add to a growing catalogue of spineless 90 minutes completed abroad. It seems like United have a major aversion to getting their passports out and entering foreign soil. It is worrying trend for a club who still harbour Champions League aspirations: A competition they used to show the utmost respect.

A word that cannot be associated to this season’s Europa League, despite it potentially offering a route back to the promised land of the Champions League. Zlatan Ibrahimovic, off the pace for some time now, looked more interested in falling for the bait of the Turkish crowd and inciting tactics from Fenerbahce players. He looks like he is running on empty, an observation that more apparent with the Swede riddled with next to no confidence due to his goal drought. Something has to give.

Despite 70% possession in Istanbul, United lacked penetration for large spells and only showed any desire or purpose after Wayne Rooney’s cracking strike from range gave United the remotest of sniffs. The damage had been done- initiative, guts and direction for a mere 5 minute spell at the death is nowhere near good enough for a United side.

The tactics from Fenerbahce were predictable: Make it as intimidating as possible, break up play and niggle as often as possible and hit on the counter with pace after soaking up United’s laboured approach. United appeared shell-shocked after Moussa Sow’s bolt from the blue overhead kick only a minute into the game. As unexpected as that goal may have been, there was still more than enough time for United to recompose themselves and grab a stranglehold on proceedings.

That was the time for players to stand up and be counted. Yet the play was so pedestrian that Fenerbahce probably couldn’t believe their luck that they could just retain their shape and keep nine players behind the ball. Being 2-0 in a hostile environment, you need your personalities to take the game by the scruff of the neck. After Jeremain Lens, a player binned even by David Moyes’ lowly Sunderland, beat De Gea with a pinpoint free-kick, that was seemingly the sign for heads to drop even lower rather than feeling hurt and getting angry.

This surrendering and accepting defeat appears to have been initiated from the manager. Mourinho is a picture of discontent and cuts a forlorn figure on the touchline. There is a resignation from this United side that when the going gets tough, the task is insurmountable. They crumble and fall like dominoes. In times gone by, United would still believe they could retrieve any situation, no matter how tall the order. Nowadays, they are plagued by a distinct lack of belief. That has spread to the fans too, with United all but giving up the ghost at 2-0 sapping all hope that United could rescue the game. The cold fact is it is taking longer than expected to restore that steely identity so long associated with our great club.

Martin Samuel, of the Daily Mail, wrote this week about an epidemic that is the scourge of modern-day football but also one that gravely affects United players: The social media obsession. Paul Pogba loves a post or two, but the argument his football needs to be doing more of the talking was a fair bugbear. Do United even realise the gravity of their situation? At risk of getting cut too far adrift in the league, festering in eighth place, and their Europa League ambitions, or lack of, hanging in the balance. This is no funfair ride, United need to get their act together before the alarm bells become deafening. The buck falls ultimately with the manager, but the players need to have a good hard look at themselves.

A couple of positives, albeit not enough to brush the result under the carpet, were a confidence boosting goal for Wayne Rooney and United fans finally getting another glimpse of Henrikh Mkhitaryan in a red shirt. The Armenian had a weird cameo in that it was a mix of playing tidily, increasing the tempo but with some unfathomable losses of possession. He can be given the benefit of doubt of rustiness but his reemergence will no doubt delight the majority of expectant United fans.

United are still everyone’s big fish to fry, the team they all want to beat and Sunday will present its difficulties. Swansea are scrapping for their lives and intent on impressing their new manager. They beat Van Gaal’s United in the same fixture last season and will no doubt raise their game to see where United are at psychologically and physically after their exertions in Turkey.

United need to stop feeling sorry for themselves and thinking the world is a harsh place and always against them. It is time to show some bottle, fight and ownership that continue to elude them in Europe.