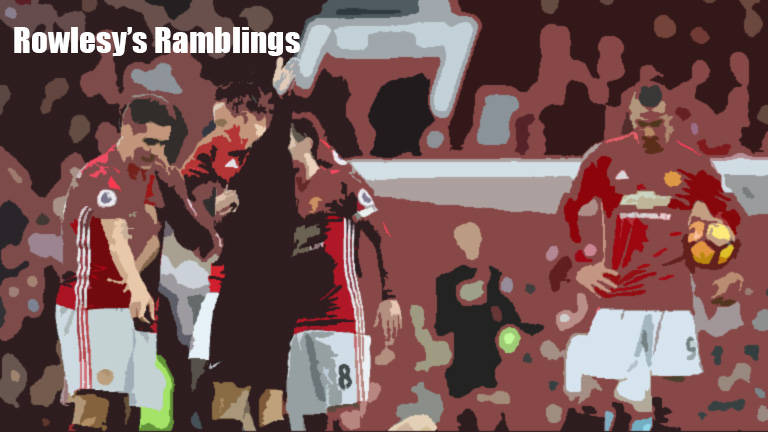 The frustration after United’s inexplicable goalless draw with Burnley was exacerbated by title hopefuls Arsenal, City and Liverpool all winning at the weekend. The media have had a field day, taking to their keyboards with broadly grinning faces:

They have argued Mourinho is over the hill and in the shadow of the vibrancy Klopp, Pochettino and Guardiola bring to this league.

They love the fact former United graduates Tom Heaton and Michael Keane, almost pre-written, came back to Old Trafford and played out of their skins.

They are loving their coordinated campaign of sabotage, designed to write Mourinho’s obituary as a winning manager. His supposed implosion at Mark Clattenburg, now to be known as Mr Self-Centred, and his refusal to penalise Jon Flanagan for a blatant trip on Matteo Darmian was seen as a fit of rage that has been building up for weeks- down to discontent with how things are going in Manchester on and off the pitch. The facts were skated over: He had every right to be riled and this was Mourinho showing the fire he needs to rediscover.

They are loving Zlatan Ibrahimovic’s most barren spell in front of goal for nigh-on a decade. Arguably football’s most confident being is supremely low on ammunition in his greatest weapon. No doubt that’s Mourinho’s fault, too…

They are loving United’s mounting selection problems. Mr Self-Centred’s decision to send off Ander Herrera, who clearly appeared to slip and tried to pull out of his second yellow card, has left Mourinho having to tweak his side yet again, with his best eleven still unbeknownst to him. Paul Pogba’s performances have improved thanks to Herrera flourishing in the protecting role and having to chop and change the midfield again is far from ideal for Mourinho.

The continual omission of star studded signing Henrikh Mkhitaryan should be curtailed after Herrera’s dismissal means an extra midfield body will be required for the Swansea match. Football is a strange game as it is reality based on hypotheticals and many will say the Armenian’s absence is costing United in the attacking stakes.

They are loving that Mourinho’s points tally after 10 league games is sandwiched between that of Moyes and Van Gaal. That number is no yardstick to judge a United side evolving yet again after two post-Ferguson catastrophes. People are desperate to see United and Mourinho fail again, just look at the love-in for Spurs, City and Liverpool.

Everyone will be overthinking the draw with Burnley, raging that a team that cost less than Paul Pogba to assemble could not be beaten. Simple fact of the matter is that this was a game of missed chances and United have no-one to blame other than themselves. They smashed Opta records for the most amount of shots and didn’t take a single one, there’s only so much you can curse your luck.

United are undoubtedly a team in transition and work in progress. If they harbour top four and more ambitions this season, they desperately need to improve their third lowest position in terms of shot conversion- at a mere 10.2% of chances taken and a staggering 16 clear-cut chances spurned. The garden would be a lot rosier had we not lost cheap points from those unhappy numbers.

United need to rediscover that killer instinct, that is the biggest missing ingredient that is killing us currently.

No-one epitomises United’s current predicament than the off-colour Zlatan Ibrahimovic. The Swede was in a charitable mood on Saturday, with his miss in the final minute typifying the day United had in front of goal. He, like United, started the season like a house on fire with five goals in his first five games. He has escaped much of this season’s criticism. It seems that form was based off pure adrenaline and a buzz that a new manager invariably brings.

The man’s confidence is sapping rather than oozing. He has been guilty of missing chances he normally buries without thinking. He should have punished Stoke within 60 seconds, another two vital points dropped at home, and failed to finish off City in the cup when it seemed easier to score. Those last three words summed up his miss from Paul Pogba’s delicious cross in the last minute. It was just wholly inexplicable. He spurned a huge twelve chances one way or another. The predatory Zlatan has gone AWOL. We need him back firing sharp.

What can you do with him though? Mourinho has looked to get full value out of him, playing him at every opportunity in his most physically testing venture yet. His hold up and link play is like no other, qualities the more fleet footed Rashford and Martial do not possess yet. Despite being 35, Zlatan is still the complete centre-forward. Do you take a man low on confidence out of the firing line or do you play him into form? That is the conundrum Mourinho faces as he needs results and, after making a massive call in dropping Wayne Rooney, would he make another one so soon when he is under intense scrutiny with every move he makes?

You shouldn’t need to take the cheap option and criticise Mr Self-Centred for United’s lack of result. The numbers will tell you United had more than enough chances to give Burnley a bloody nose. Football is a funny game, it has its strange anomalies: Celtic beating Barcelona famously with two shots and only 14% of the possession. Saturday was one such occasion: 37 shots and no goals, it beggars belief.

For all our bemoaning of United’s stage fright in front of goal, what cannot be disputed is the performance on Saturday. United were dominant from the off, cynics will say they should be anyway against relegation candidates, and the performance really should have seen them out of sight. United were dominant when Stoke visited too and paid the price for not finishing them off, United haven’t learnt their lesson on how to beat lower-end teams who sit and park the bus. Burnley had been spanked in their previous away day trips to Chelsea, Leicester and Southampton, so of course it is annoying that they can somehow rock up to Old Trafford and leave with a clean sheet.

With United languishing in eighth piece at the time of writing, it might sound ridiculous but the results will come to mirror the performances the players are starting to put in. Saturday was just one of those days. It takes time to mould sides: The media are getting excited with Klopp and Pochettino, but they had teething problems as they started in their respective dugouts.

We cannot lose that belief that Mourinho is starting to mould United into better times and safer waters than his predecessors. We have a much better squad and the results will come.

Now is not the time for over-reactions or panic.

3 responses to “No need to panic, Burnley was one of those days.”