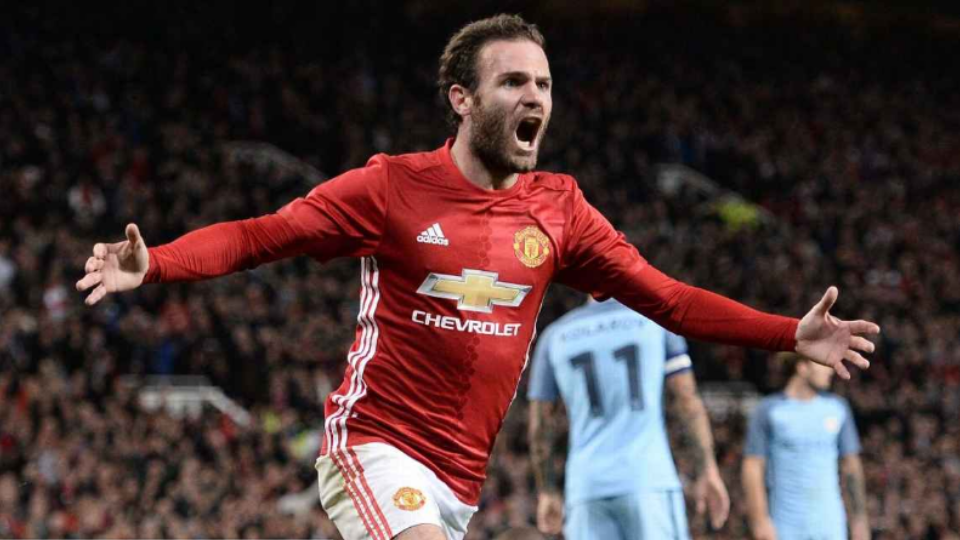 Manchester United did not start well against a surprise 4-4-2 lineup from Pep Guardiola’s Man City at Old Trafford, but managing not to concede allowed them to grow into the League Cup edition of the Manchester Derby. Juan Mata turned out the hero, charging late into the box to volley home a squared pass from Zlatan Ibrahimović that had been intended for Ander Herrera, who had collided with Fernando. Of the two managers, José Mourinho fielded the stronger side, and it paid off. Here are three points of interest from the contest:

Before the match, I noted many of United’s top scorers were going through a dry spell, and, to break their ducks, might want to try the solution successfully used by a certain hockey player, whose grandmother’s talismanic qualities had just helped him out of his goalless rut.

Johnny Kills was one of those players, but, needless to say, he hadn’t been killing it lately. The Spaniard hadn’t disturbed the twine in his previous four appearances. His strike in this one was just desserts for the tireless shift he put in. It seemed the Spaniard never stopped running, with or without the ball. Whether it was transitioning up the pitch, or across, running in behind Ibra, tracking back to break up City attacks, Mata did it all. Mourinho can have no complaint regarding his number eight’s commitment at Old Trafford, whatever passed between them at Stamford Bridge.

2. Someone needs to have a word with the Old Trafford groundskeeper.

Throughout the match, several players on both sides slipped and fell in the midfield area. For United, Zlatan lost his footing several times. Antonio Valencia wiped out just when it appeared he had darted in behind Gaël Clichy. Luke Shaw and Paul Pogba went down as well. Ibra’s multiple pratfalls seemed to put him off his game in the first half. He made several poor passes which were intercepted by City defenders.

For a time, the malady seemed contagious. Michael Carrick, Herrera, Pogba, and Shaw all sent balls behind their intended targets, allowing City to break into several counterattacks. Thankfully, nothing came from them. City’s best chance came in the second minute, when Kelechi Iheanacho harmlessly headed a perfect Jesús Navas cross over the bar. David de Gea was never really tested again.

At the opposite end, City’s back four had a great deal of work to do once United found their bearings. It began with a clever through ball on the left from Rashford to the overlapping Luke Shaw. The fullback laid the ball off to Pogba, who toed it to Ibra, but the big Swede’s volley was deflected into the stands. Inspired, Zlatan fed a similar pass to Rashford, who dashed into the box, but was diverted, then closed down, before he could test Willy Caballero. Guardiola’s second choice keeper next had to be alert to a deep Pogba cross whipped into the box from the right side, rushing out to put a fist to it before Ibra could arrive.

Admittedly, United’s dominance was slow in building, which is something the manager must address. You can’t win matches in the opening minutes, but, as the side learned at Stamford Bridge, you can certainly lose them. Still, it’s comforting to see the attacking players establishing a familiarity with one another. If they can only rely on their groundskeeper in the same manner, this may turn out to be an enjoyable season, after all. If not, well there’s no need to wait until the transfer window to bring in someone new.

I’m man enough to admit when I may have been wrong. I say may, because Michael Carrick needs to show he can hang with the best someone like Pep Guardiola can throw at him, not “the Manchester City reserves,” as Jamie Carragher, during the Sky halftime show, termed the eleven sky-blue shirts on the pitch on this evening. Against any opposition, however, Carrick certainly looked better than Marouane Fellaini.

For one thing, he takes advice from Clint Eastwood. Understanding he isn’t the fleetest of foot anymore (if he ever was), Carrick is making deep the operative word in deep-lying playmaker. By not venturing too far up the pitch, he was able to track back to help another slow-poke, Daley Blind, when needed. Blind and Marcus Rojo made a decent center-half pairing from the third minute on, by the way, not that anyone is suggesting it remain Mourinho’s first option.

In the first half, Carrick established a critical defensive position against Aleix Garcia, who went down looking for a penalty. Mike Dean was competent in his officiating, however, understanding it’s only a penalty when the defender steps on you, not the other way ’round. Yet, hanging back did not prevent Carrick from making several incisive passes. He nearly saw Marcus Rashford in on one perfect long ball, but, in general, settled into a more fluid connection with his two Spanish counterparts, Mata and Herrera. In doing so, he gave Pogba license to play effectively (in the second half at least) in the more forward role the Frenchman prefers. Although, in the past, I was concerned Carrick might be exposed against Premier League opposition, I wouldn’t be opposed to Mourinho giving him another run-out against Burnley at the weekend.