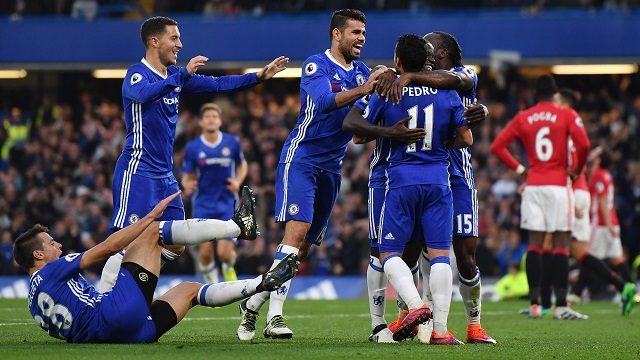 For all of Chris Smalling’s improvements since he made a complete fool of himself in Louis Van Gaal’s first Manchester Derby, there was always a lingering suspicion the manager’s cowardly system was protecting him. Packing in extra defensive cover in midfield and refusing to attack the other team with the ball so as not to lose possession. All to protect Smalling from being exposed. Just as Jose Mourinho did at Anfield a week ago. Unfortunately, Smalling’s unconscionable tendency to have massive, sloppy brainfarts, combined with bizarre team selection means we saw Smalling in all his nightmarish grandeur against Chelsea.

His refusal to attack an aerial ball, that lead to the first goal, made him look like a man attempting to play football while simultaneously ordering a takeaway pizza. He is the archetypal modern English footballer; all the physical attributes of a top player but utterly devoid of any brain cells. When people ask why England aren’t much good these days, critics can point to Smalling, John Stones and Gary Cahill being the best available without uttering a word.

We need to talk about Zlatan

It would be enormously hypocritical to lay into Wayne Rooney and not say a word about Zlatan Ibrahimović. In many ways he is worthy of more criticism than Smalling. Smalling was bad but he at least had the good sense to look embarrassed. It was bad enough Zlatan flittered between awful and anonymous worse though, was that he plainly didn’t give a flying f***. The end of the game saw a senior figure in the United squad laughing, joking and swapping shirts immediately after his team was humiliated. This has compounded what has been a woeful spell of form. The Swede had now gone nearly 500 minutes without a goal and has made Rooney look like Luis Suarez with his lack of movement and mobility and lazy finishing.

He may be in good shape but he is 35 years old with many miles on the clock. He was not supposed to playing almost every game. Its time to take the big man out of the firing line and employ Anthony Martial and Marcus Rashford together in attack instead. United need movement and mobility going forward otherwise they will continue to flounder like tepid waves against a giant cliff face.

Now is not the time to panic

Already people are making unflattering comparisons between Mourinho’s start to this season and his predecessor’s start to the last one. On some level it’s understandable. His record in the six years since winning the 2010 Champions League has not been as good as the six years previous to his treble winning season at Internazionale and he his experiences in Madrid left him embittered and jaded.

On the other hand, that belies the great, stinking mess he inherited. Not from the previous manager but from the club as a whole. Alex Ferguson’s final few years saw a parsimonious transfer policy force him to construct a squad that resembled machine cobbled together with scrap parts, and only workable by the mad inventor who built it. Since his retirement, the transfer policy has been to simply throw enough s**t and hope some of it sticks. The result is a wildly uneven squad that Mourinho has to get a grip of in a league that borders on unbridled chaos. For all of this cynical, jaded loudmouth’s apprehension over Mourinho’s appointment, he simply has to be given more than just a few months to sort out an omnishambles that has been building up for several years.