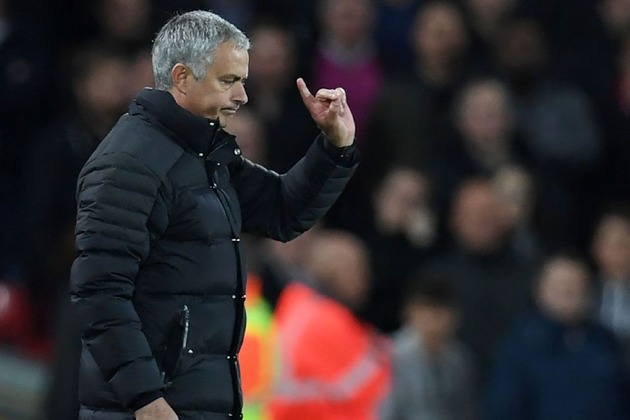 Sky Sports’ overly lavish billing of ‘Red Monday’ was, for all intents and purposes, meant to demonstrate how Mourinho’s supposed suffocating and uninspired football had been given a death sentence by Jurgen Klopp’s god-given, firecracker brand. The fixture was dubbed David v Goliath, so how sweet it was to piss on Scouse chips.

Mourinho has been no stranger to playing the villain down the years, he has made it his party piece. The Liverpool love-in in the build-up to the game only fueled the fire further for the United manager to set his stall out to frustrate. The media, riddled by the annual plague of delusion, are adamant this is Liverpool’s year and they would just walk over a supposed bleeding hyena in United was Mourinho’s team-talk done for him.

To, in a way, laud a goalless draw is not the United way and will not sit easy with United supporters accustomed to wave after wave of attack. This is Mourinho’s setup in the crunch games, which can potentially be season defining. No-one can claim to the contrary or could have expected United to adopt a cavalier approach and lose their heads in the battle. To fight fire with fire, in theory, could have been a recipe for disaster. That would have played right into their hands, so we should make no apologies for setting up in a way to nullify. It was tactically sound from Mourinho and he knew it.

The bragging rights from a victory in this fixture are unparalleled, like no other. So, of course, it is the best feeling a United fan can experience. That means there will be those among you frustrated by United’s deliberate lack of ambition at Anfield, wondering what might have been. A leopard doesn’t change its spots and United fans will have to suck it up and accept that Mourinho has pragmatism at the forefront of his mind when the points matter most.

He was indebted to the world-class David De Gea for coming away from Anfield with a share of the spoils. In my last rambling, I maintained we would see the best of the Spaniard after his costly blemish against Stoke, it was almost as good as a promise. The save from Emre Can was outstanding, the one from Coutinho was bordering miraculous. Sometimes players need that wake-up call to raise their game. De Gea’s sterling standards were not met when Joe Allen equalised at Old Trafford, safe to say that was some response at Anfield.

For Mourinho to forgo the more offensively minded Mata and Lingard to accommodate Fellaini and Ashley Young, who incidentally impressed on the wing, raised a few eyebrows. To make such brash changes after describing the Stoke performance as the best of the season highlighted Mourinho’s intent to pour cold water on a raging flame of Liverpool fanfare. This was a United side brimming with solidity across the park. With many people throwing United lack identity jibes around, arguably this was the first time Mourinho’s blueprint was on display.

One man who has benefited no end to having the Portuguese in the dugout is Ander Herrera. He has extinguished fires all season in this new sitting role which is aiding United’s defensive game. He has always buzzed around, bringing vibrancy and tempo to the engine room but he has really stepped up to the plate this campaign. His interception count reached double figures at Anfield, some feat given that Liverpool were supposed to swarm like bees over United. The Spaniard was a huge factor in foiling Liverpool’s pressing game and was the deserving man of the match, although his fellow countryman ran him close.

Herrera’s patrolling of the defence has enabled Paul Pogba to have freedom further up the pitch and he was trialed in the number 10 position to give dynamism around a toiling Zlatan Ibrahimovic. The change in position nearly had the desired effect- his cross found the Swede who could not connect properly with his swede, in what was United’s most glaring opportunity in a drab encounter. Herrera’s flourishing and Pogba’s licence is further writing on Wayne Rooney’s wall, consigned to an attempted cameo role once again.

‘Celebrating’ a point at Anfield would be the wrong description, more of the ‘quietly content’ variety. United were supposed meat to the lions and they came out of it without a bite mark on them. Mourinho knew pragmatism would win the day as a defeat here could have been curtains for United’s prospects this season. It told us that United can handle themselves in the bigger games. It is just combining that solidity with enough attacking purpose to take all the points- that is the next step.

Mourinho’s fire should be burning just as intensely at the prospect of going back to his old stomping ground and finding that balance. I guarantee all of you would have taken four points from trips to Anfield and Stamford Bridge after the disappointment of drawing at home to Stoke and Chelsea away is certainly a winnable fixture.

Mourinho should, and probably will, prioritise the weekend over Thursday’s clash with Fenerbahce. I’d expect changes to be made to ensure United’s strongest are all charged up for another domestic battle.

He will make no apologies for coming away from Anfield with a point, with justification.

Whining Scousers? Someone change the record.