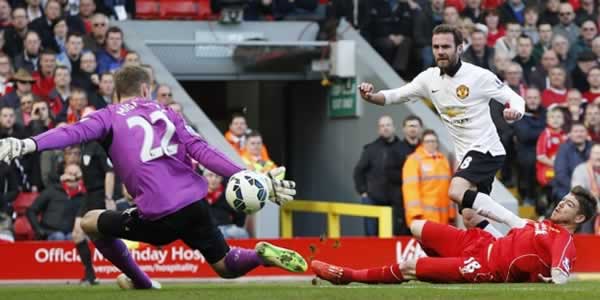 If there was one thing that Louis Van Gaal could hang his hat on during his oppressively dull spell at United, it was his record against Liverpool. Van Gaal retained a 100% record against United’s greatest and most bitter adversaries.

Then the teams drew each other in last season’s Europa League in which Liverpool, at this point, were managed not by David Brent-an Rodgers but dreamboat Geography teacher, Jurgen Klopp. Liverpool proceeded to thoroughly embarrass United in both legs in a defeat akin to the one suffered against Marcelo Bielsa’s Athletic Club. An experience which could be described as Total Football on cocaine.

Klopp’s Liverpool aren’t far removed from that. As a diehard United fan, it pains me to say it but Klopp’s Liverpool are an enormously thrilling team to watch. Employing extremely fluid variant of a 4-3-3 which sees Adam Lallana and Georginio Wijnaldum striking from deep behind any three of; Daniel Sturridge, Roberto Firmino, Philippe Coutinho (who tormented United last season) and one-time Van Gaal target, Sadio Mane. With that pace and directness, it is pretty much a realisation of the “heavy metal football” Klopp once described at Dortmund. At times it has been a footballing equivalent to the Download festival.

Make no mistake United are in for a tough old slog at Anfield come Monday night. Liverpool’s team are truly a team, with players that understand one another playing superbly entertaining football. In contrast, United still have the look of a disjointed gathering of individuals tasked by Alan Sugar to sell vintage lamps on a market stall in Ealing.

Whatever it is Mourinho is trying to do with this group of players, it hasn’t come together yet, if it is even clear at all. Wayne Rooney and Marouane Fellaini have seemingly been dispensed with and there has been plenty of chopping and changing with the lineup. As a result, United’s form has been patchy, only taking 4 points from the last four league games.

Nevertheless, the signs of improvement are there. Ander Herrera has buzzed his way into the team and a fluid attacking entity is beginning to form. Of course there is also Eric Baily with the brutal physicality of a surly rodeo bull and the finesse of a Flemish Master. Throw in the bright starts of Zlatan, Marcus Rashford and the real Anthony Martial returning to take his imposter’s place and we can be slightly more optimistic than a Morrissey song.

Everyone connected with United will be hoping all of these previously disparate inconsistent elements will come together on Monday, because this is a game United cannot lose. Especially in lieu of United’s recent frustrating form.

It is hard to predict authoritatively, how United will set up at Anfield due to erratic team selection. However, one suspects Mourinho may well set up to take the sting out of the atmosphere and stifle the pace of the game. It was only two seasons ago that Mourinho – deadest on spoiling Liverpool’s premature championship party – went to Anfield with a second string team and proceeded to antagonise everyone present on the way to a 2-0 win. A reminder that this was the scene of the infamous/hilarious Steven Gerrard slip. Something that resembled a scene from Charlie Chaplin’s classic movie, Modern Times.

If the mood takes Mourinho, he may well be inclined to do this again. If only because he seemingly gets a kick out of pissing off his “haters,” as the kids say these days. It won’t be pretty, but slowing things down and playing the long game rather than trying to outgun Liverpool maybe United’s best bit on current form.

Still, as a hopeless romantic, wrapped in the veneer of a horrible bastard, I’m hoping Monday night is when all of the fabulously lavish jigsaw pieces finally click together. Something akin to the formation of Led Zeppelin in 1968.