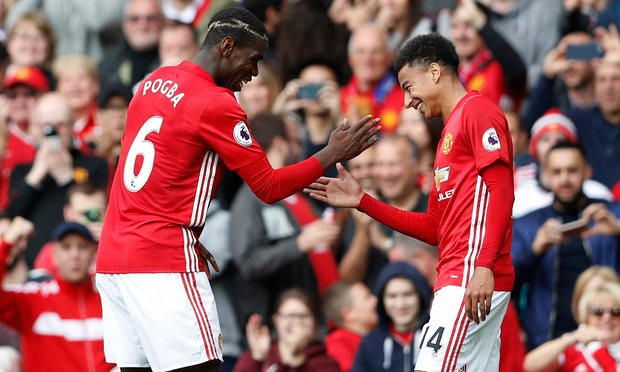 There have been countless false dawns in the post-Ferguson era at Manchester United. Even the latest incumbent of the United hot-seat has experienced this irksome frustration, even at the embryonic stage of his tenure. A spectacularly flawless start was followed by an equally spectacular fall from the summit in the space of a week. The visit of champions Leicester, whose own drop from the top was perhaps more anticipated, raised a lot of pre-match questions about whether United would have the durability to respond to a supposed mini crisis and mount a serious title challenge.

Many doubted whether Mourinho would uphold his fearsome reputation for ruthlessness and cull his out of sorts captain for the greater good of the team. Something had to give, after three sobering defeats a different recipe needed to be concocted. We were treated to one full of zing, spice and bite. Rooney made way, almost inevitably after a dire showing against Northampton and boy, it was vindicated.

After a familiarly laboured start to proceedings, United kicked into gear and the chains and nerves were released when Chris Smalling powerfully headed past former United trainee Ron-Robert Zieler. You could sense the relief around the ground with the atmosphere buoyant after the ice breaking goal. The snowball effect that followed was spectacular.

My wish, along with my fellow Stretty News wordsmiths, for Ander Herrera to start in a midfield three turned to reality on Saturday. Paul Pogba’s captivity was relinquished with the inclusion of the in-form Basque, something that United fans have restlessly been awaiting. United’s zenith period of the match coincided with Pogba imposing himself and taking complete domination of the engine room battle. The spell-binding five minute spell, where United produced three unanswered goals, was reminiscent of the old United and the swagger, tempo, intensity and fear factor had returned and some. What crisis?

For £89 million, many will raise the point that this is the bare minimum Pogba should be delivering. The man isn’t a water to wine producer but he can sure as hell produce those explosive moments that wholly justify the big reddies to snare his signature. The audacious, improbable effort from long-range that nearly caught Zieler off-guard had the crowd gasping in awe and acted as a catalyst to liven up proceedings on and off the pitch. Players bounce off Pogba when he is in the destructive, all-powerful mode and this has given United real zest in their transitions to the final third.

The Frenchman was assisted greatly by a captivating display from the Spanish Dennis The Menace. And Menace is an apt way of describing Herrera’s involvement against Leicester. He is a fan’s favourite due to his desire to quicken proceedings with his sharp one/two passing and borderline telepathic rapport with Juan Mata. His style is very much in keeping with the United way, as is his wholeheartedness. In the kindest sense of the word, he must have been horrible to play against on Saturday. He constantly buzzed around the pitch, was snapping into tackles and his hustle and bustle gave United the dynamism which enthralls the crowd and brings out the best of the other players- this was certainly the case for Pogba. Considering United’s line-up did not consist of a specialist holding midfielder, Herrera gave off the impression he had shielded many a back four in his time.

Juan Mata flourished in the number 10 position. Often deployed out wide, Mata seldom had licence to get the ball under his spell in pockets of space. His ability to pick up the ball in weird and wonderful spaces meant Leicester’s defenders had no idea where to pick him up. This gave United’s midfield a lot more balance and fluidity as Lingard and Rashford often swapped flanks, with Pogba and Herrera intertwining positions. It was delightful to see eleven red shirts not inhibited by trepidation and mechanics. There was licence to entertain and the end result was glorious.

Saturday’s success was to the detriment of Wayne Rooney, who has been blighted with poor form for some time. Enough was enough as he was put out of his misery, the majority of United supporters could say the same too. Winners always mean there are losers, even as a collective. Mata and Pogba, in particular, will be bouncing in this new-look United. Rooney still has a strong core of support within Old Trafford, as demonstrated with the chorus of his name as he entered for a mere seven minutes. United delivered such a convincing display in his absence from the start which does not bode well for him. Fact is, the writing has been on the wall for some time. United needed a change of tune after the trio of defeats and he was the obvious and convincing fall guy.

The call from Mourinho was not as ballsy as the media will undoubtedly make it out to be when you read the back pages over the coming days. On current form, Rooney is not worth his place in United’s best eleven. Simple as. Mourinho had to do what was necessary to get United purring again and the decision cannot be questioned, even from the most staunch Rooney advocates.

The confidence returned on Saturday, it is now time to kick on with successive home games. There has been many a false dawn at Old Trafford, this needs to be the start of something.