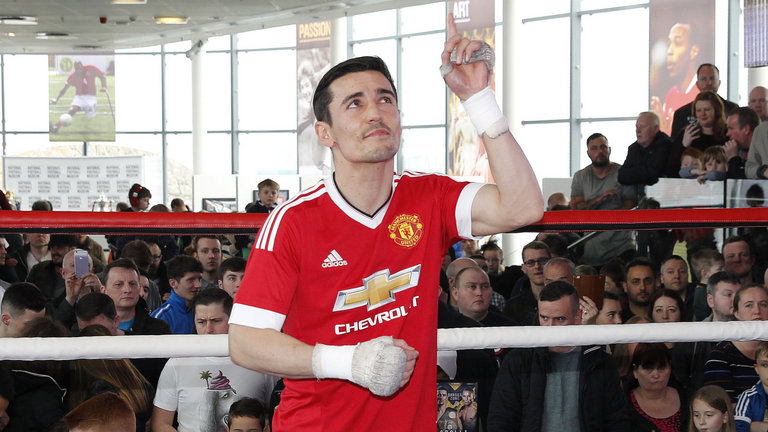 This weekend lifelong Manchester United fan and Mancunian hero Anthony Crolla will look to build on what has been a fairy tale career in the boxing ring to date.

He originally won his WBA lightweight title after overcoming a near life threatening attack from muggers — that saw him hit over the head with a cinder block and left for dead a few years back.

Crolla, trained by current Ring Magazine trainer of the year and passionate United man himself Joe Gallagher, will be well schooled on his south American counterpart Jorge Linares coming into Saturday night’s dust up at the Manchester Arena.

Linares is a dangerous foe. Either way you dice it.

A very skilled boxer, who can punch, move well and dig in when the going gets tough. This fight will represent two of the very best 135lbs pugilists in the world coming together and is rightly so for the prestigious Ring Magazine belt.

Crolla is a red truly on fire coming into this bout however and will carry the edge in momentum in my view, which can count for a lot in a sport as passion driven as boxing.

This palpable positive energy was executed in a controlled manner beautifully last time out, in his stand out win of his career to date when he stopped the much feared Ismael Barroso back in May at the Manchester Arena.

Indeed home advantage in Manchester is something that Crolla really appears to thrive on, giving him an ever so slight advantage this weekend in what in truth is a genuine 50-50 fight.

Jorge Linares in no stranger to coming to the UK mind you, having successfully beaten West Ham man Kevin Mitchell back last May in a thriller.

Crolla and Linares are two consonant professionals who made the weight as expected without any difficulty, both looking in optimal condition, suggesting Saturday night in Manchester could be a real barn burner.

The hometown man Crolla will be spurred on by his growing army of Manchester fans, many of whom are United fans and with the backing of none other than Wayne Rooney himself coming into the fight, he won’t be short on support.

Jorge Linares is a fighter that many would have stayed clear of but Crolla actually asked for the fight from the off, according to his promoter Eddie Hearn.

This tells you everything you need to know about the man. Courage and a sincere will to be the best he can be are at the root core of his being.

Timing is everything and for me Crolla gets this by late stoppage or on points this weekend – roared on by chants of ‘Glory Glory Man United!’.

By Niall Doran of Boxing News and Views