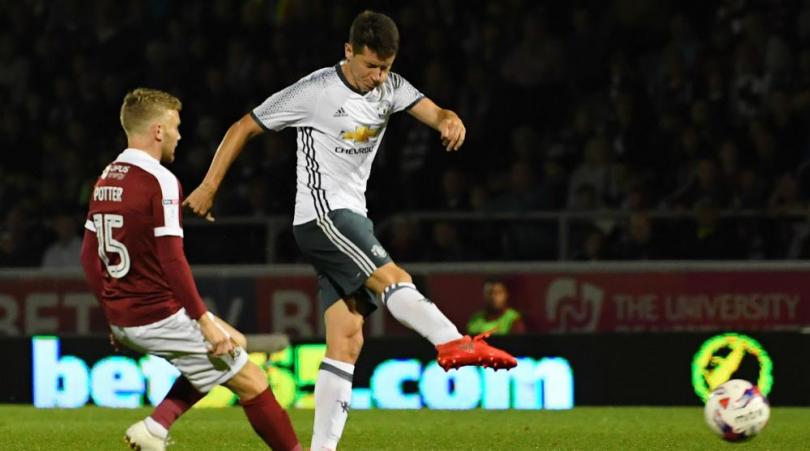 Manchester United booked their place in the fourth round of the League Cup with victory over Northampton Town.

Jose Mourinho’s men will face Manchester City in the next round, proving to be tie of the tournament thus far with Liverpool v Tottenham also coming out of the pot.

Had a couple of shaky moments despite not having to make a notable save throughout the game. He was sent the wrong way for Northampton’s penalty.

Looked like a player in the wrong position at right-back. An uncomfortable start to the game was followed by Fosu-Mensah losing concentration in the lead up to their penalty.

Alex Revell is renowned for his physical presence but Smalling remained composed throughout and won every battle against the Northampton striker.

Received no help on the left side of defence resulting in a game for forget for the Netherlands international.

The furthest thing from a Manchester United player in a white shirt. A woeful headed clearance lead to unnecessary pressure at the back before the referee awarded Northampton a first half penalty. Still, though, a slight improvement from that night in Rotterdam.

From start to finish Carrick was fantastic and Mourinho ought to have his head examined if he leaves him out of the United starting eleven that takes on Premier League champions Leicester City this weekend. A beautiful finish handed the reds an opener strengthening his case for why he should be a regular starter — and not Fellaini.

Impossible not to have concerns about his use of the ball but Schneiderlin made a good challenge in the build-up to Herrera’s goal.

Herrera did what he needed to do against Northampton. Stand out, find holes in the opposition’s midfield/defence as well as the back of the net. Deserves to start on Saturday.

Started the game brightly but nothing came off for the former PSV Eindhoven winger. Substituted after 55 minutes due to providing a lack of attacking threat when United needed a goal.

Came centrally in the first half when service out wide on the right was limited. Performance picked up in the second half when pushed back to right-back.

If Rooney is to play for United it must be up front. I’m sticking with that for now even after tonight’s abysmal performance by our captain. Missed a simple chance in the opening minutes and had several heavy touches on the ball. Needs to be dropped but has Mourinho got the balls?

Zlatan Ibrahimovic: Quiet when he came on. Not worthy of a rating.

Maroaune Fellaini: Brought on to be a pain in the arse. We saw out the game. Result but rarely pretty. Like Ibrahimovic, not worth of a rating.