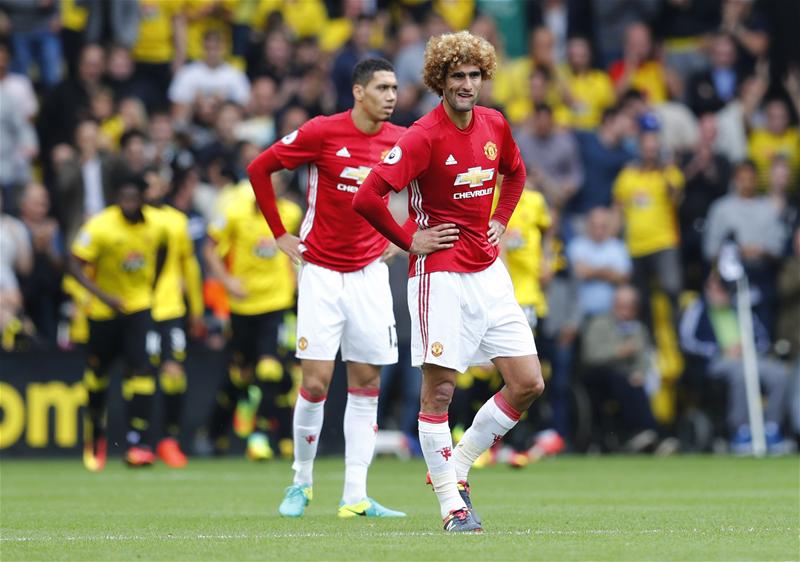 It was looking all so rosy for Jose Mourinho and his evolving United side as August broke into September. His side had accomplished three wins from three with his stardust signings Pogba, Ibrahimovic and even unknown quantity Eric Bailly all acclimatising swimmingly to their new club. A last minute winner at Hull to secure the third straight win was eerily similar to the good old days and United fans were reveling in the unblemished start.

How the honeymoon period has crash and burned, reality is starting to set in: United seemingly face a tall order to re-establish themselves as genuine title winners this campaign unless they get their act together fast. A vomit inducing derby defeat followed by a humbling and abject display in Holland on Thursday had me convinced that United would show up at Watford as a wounded animal and meaning business.

This is a Jose Mourinho side we are talking about, for god’s sake. The man is, I refuse to say ‘has been’, a serial winner whose personal pride must have taken a hit this past week, let alone the Titanic evoking final few months at Chelsea. Every time our title winning sides down Memory Lane suffered a setback, they responded ruthlessly with pride damaged.

This was Mourinho’s home run swing when he clinched silverware at Chelsea. Like Ferguson, his unmistakable siege mentality, ‘us against them, to hell with the rest’ approach was just as powerful a tactic has the on-field plans. His Chelsea sides had big characters and personalities- Terry, Lampard, Drogba to name a few. They were all united, relentless in their quest for honours and hungry for the May medallions.

Likewise, United fans spoiled with success have been blessed to witness the likes of Robson, Bruce, Hughes, Keane, Vidic, Neville give blood, sweat, tears and guts for the badge on the shirt. Warriors who would not accept defeat if it was staring them in the face. These guys were as tough as they came mentally and many United fans are rightly craving a restoration of the good old days where players, at times, literally fought for the shirt with the will to win from the manager reverberating through the club’s core to the players.

So, Mourinho needs to stop feeling sorry for himself, ruing supposed bad luck, playing the blame game with referees and take responsibility for this car crash of a week. He is making the same mistakes with personnel, style and selection and his wet lettuce, defeatist demeanour is a far cry from the siege mentality we all want to see.

Mourinho’s ruthlessness of the past needs to come to the fore as a matter of urgency now. The supposed untouchable captain should have been denied that privilege a long time ago, unless the suspicion that his contract stipulates otherwise, and continues to act as the biggest nuisance and inhibitor to the ideal United way of playing. A spent force up front being ‘converted’ into a spent force in the middle of the park. A playmaker, with a gravely awry passing radar, giving the palest imitation imaginable of the kind such has been his inefficiency. Rooney defenders will deny he has ran himself into the ground, failing to acknowledge far more model pros in Zlatan and Cristiano Ronaldo are having Indian summer of careers, rather than huffing and puffing to a questionable end.

Heavy, spent legs alongside Fellaini? This is not one of the ingredients of a title winning recipe. Are these two nullifying Pogba? Should the world’s most expensive footballer need to be accommodated or simply be able to fit into any given system?