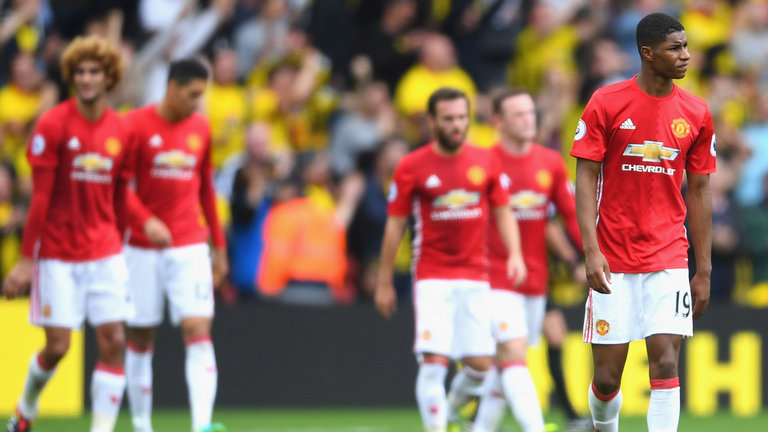 Another day, another dire display from Manchester United in what has been a worrying week indeed. In my prediction column I fancied us to bounce back from back-to-back-defeats. Little did I know United would end up surrendering quicker than the Republican Party did to Donald Drumpf’s ego. Yes Michael Oliver is an utterly useless referee but United were still complete toilet, so here are three things I took away from a woeful trip to Watford.

Mourinho needs a plan B

No sane person would dream of calling for Mourinho’s head however, he does have to take responsibility for 3 poor performances in a row. The most troubling aspect of the eight days, is that each performance has been worse than the last. Today’s defeat at Vicarage Road was exactly the result United deserved for a truly pathetic performance. The meekest of meek surrenders. Watford were far superior in every department. More aggressive, more determined and more inventive, United barely offered Watford a contest. Mourinho no needs to go back to the drawing board. There is no way to fit in Ibrahimovic, Rooney, Pogba, Rashford and Martial in the same team, especially when one is 34, one plays like he’s 84 and Martial is woefully out of form.

At the moment Mourinho seems to be dithering as Van Gaal did when things began to unravel. Its time for him to stop sulking, put his pride and personal preferences (Rooney, Fellaini) and enmity (Herrera, Mata) for certain players aside if he wants to make a marriage he has so long coveted, be a happy and successful one.

For all his effort, Fellaini is not good enough

One key point overshadowed by Wayne Rooney’s sheer, staggering awfulness, hypocrisy and horrid sense of entitlement is that Marouane Fellani is simply not up to scratch as a Manchester United player. You cannot fault the man for his effort but in the match’s key moments he let the team down committing errors to lead to two Watford goals. Yes he maybe good comedy value but the qualities the big Belgian lummox offers are really not up to scratch for a team with pretensions to be dining at the game’s top table. He lacks all of the attributes needed to be a regular starter at a big club. Deployed today as part of a loose midfield three with an errant Pogba and converted forward who can’t pick a pass, United’s midfield has all the pace of ‘The All Priests Over 75s Indoor Football Match’ from Father Ted. United were duly overran by Watford’s aggressive and energetic midfield and Fellaini was forced into horrible errors. Its not hard to see why Carrick is being called for, even if he isn’t the answer either.

Many years from now United fans will look back on his regular inclusion the same way England fans look back on Carlton Palmer getting an England cap. With a mixture of bafflement and gentle mirth.

Rashford is the future

Marcus Rashford is something of an anomaly for an English player in this day and age. In that he is clearly intelligent and has the humility to learn and the desire to develop further. England’s problem is that their players have all the physical attributes but are simply too thick to knit those qualities together. It is a problem that rears its head every time things go wrong for England in International tournaments and why club managers resort to importing players from foreign lands. We here in England is seen as a suspiciously European trait and a sign of weakness in English culture. In Chris Smalling and Phil Jones, United have two shining examples of that most absurd mindset. Rashford, however, despite being given little help by most of his teammates this week still demonstrates tremendous in-game analytical ability. His movement for United’s goal was a prime example, allowing him to set off a wonderful one-two with Ibrahimovic – who must have been delighted to finally partner up with someone actually good – to fashion a goal United barely deserved.

The young man needs to still be managed carefully and rotated to prevent burnout but Mourinho’s future plans must include the young man from Wythenshawe.