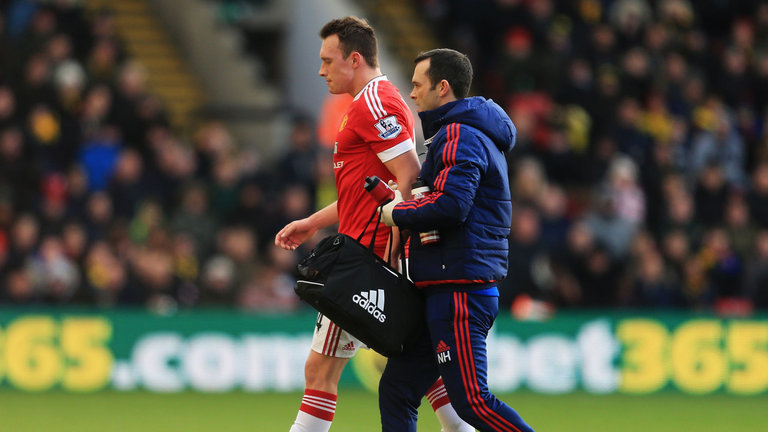 In news that will shock no-one, Phil Jones faces a month on the sidelines with a knee ligament injury.

I can’t say I’m shocked. Every year Jones is absent through injury and it’s getting to the stage now we all believe the former Blackburn Rovers defender is made of glass.

In fact, it’s not news anymore. The grass is green, the sky’s blue and Vincent Kompany has a big fat fucking head.

For Jones, who can’t seem to get a break from the treatment room, his days at United are probably numbered. How can Mourinho or the board keep showing faith in a player that injured too regularly for any steady development to take place.

Sir Alex Ferguson’s quote about Jones becoming one of the greatest footballers to wear the United shirt will go down in satirical folklore. The new Duncan Edwards, someone said. More like Dunkin’ Doughnuts!

But jokes aside, when Jones does play he puts his heart and soul into it. The click-bait websites out there (you know who you are) will continue to make fun of his facial expressions which, quite frankly, is easy to put next to a lack of intelligence. I have always wanted him to prove those wankers wrong, although that doesn’t look very unlikely, and it may be a matter of finding a new club in January or next summer.

Last season Chris Smalling got a good run in the starting eleven and became one of our more consistent performers while Jones’ progression remained non-existent. The England international lead at the back alongside Daley Blind, who was unfamiliar with the role, and United racked up one of the best defensive records in the Premier League.